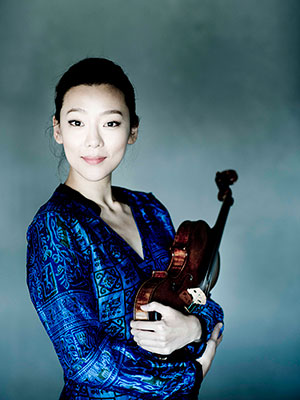 Having made her concerto debut at the age of five with the Hamburg Symphony Orchestra, Kang has since performed with leading European orchestras including the Leipzig Gewandhaus, Cologne Chamber Orchestra, Kremerata Baltica, Rotterdam Philharmonic, Orchestre National de Belgique and the Orchestre de la Suisse Romande.

In the U.S., she has performed with orchestras including the Atlanta, New Jersey, Indianapolis and Santa Fe symphony orchestras, while elsewhere highlights have included appearances with the Mariinsky Orchestra, NHK Symphony Orchestra, Tokyo Metropolitan Symphony Orchestra, New Japan Philharmonic, Hong Kong Sinfonietta, NCPA Beijing Orchestra, Macao Philharmonic and the Taipei Symphony. A prominent figure in Korea, Clara-Jumi Kang has performed withall ofthe major Korean orchestras and in 2012 was selected as one of the top 100 “most promising and influential people of Korea” by major Korean newspaper Dong-A Times. She returns annually to Korea for tours and was awarded the 2012 Daewon Music Award for her outstanding international achievements, as well as being named Kumho Musician of the Year in 2015.

Clara-Jumi Kang’s first solo album entitled Modern Solo was released on Decca in 2011 and featured works including Schubert’s Erlkönig and Ysaÿe’s solo sonatas. Her second recording for the label featuring Brahms and Schumann violin sonatas with pianist Yeol-Eum Son was released in 2016.

Born in Germany to a musical family, Clara-Jumi Kang took up the violin at the age of three, and a year later enrolled as the youngest ever student at the Mannheim Musikhochschule. She went on to study with Zakhar Bron at the Lübeck Musikhochschule and at the age of seven was awarded a full scholarship to the Julliard School to study with Dorothy DeLay. She took her bachelor and masters degrees at the Korean National University of Arts under Nam-Yun Kim before completing her studies at the Munich Musikhochschule with Christoph Poppen.

Clara-Jumi Kang currently plays the 1708 “ex-Strauss” Stradivarius, generously on loan to her from the Samsung Cultural Foundation Korea. 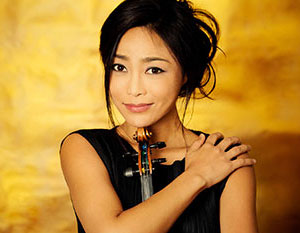 Violinist Soyoung Yoon has garnered acclaim for her “meticulous… highly disciplined” (Gramophone) and “suave” performances whose “technical perfection… is always placed at the service of the music” (The Guardian). Prize winner of major competitions including the Yehudi Menuhin (1st prize), Henryk Wieniawski (1st prize), and Indianapolis (silver medallist) violin competitions, Soyoung has earned the respect of her peers as a violinist and chamber musician of the highest calibre.

Soyoung frequently collaborates with the Korean Chamber Orchestra, having recorded Piazolla’s Four Seasons and Mendelssohn-Bartholdy’s Concerto for Violin and Piano with them,  touring through Asia, Europe, and North America in the process. Along with Veit Hertenstein and Benjamin Gregor-Smith, she founded the ORION String Trio in 2012, winning both 1st prize and the audience prize at the 2016 “Migros Kulturprozent” Chamber Music Competition in Zurich, and having performed in venues such as London’s Wigmore Hall, Zurich Tonhalle, Stuttgart, Edinburgh, Belfast, and Manchester. 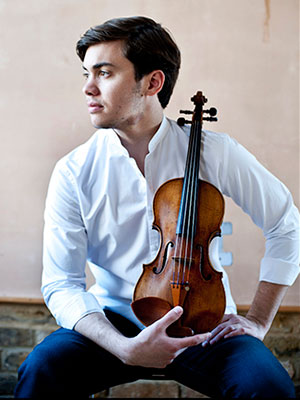 Benjamin Beilman has won international praise both for his passionate performances and deep rich tone which the Washington Post called “mightily impressive,” and The New York Times described as “muscular with a glint of violence.” The Times has also praised his “handsome technique, burnished sound, and quiet confidence,” and the Strad described his playing as “pure poetry.” A 2018 feature in The Boston Globe remarked that Beilman’s “playing already has its own sure balance of technical command, intensity, and interpretive finesse.”

Planned engagements for the 2020/2021 season included the San Francisco Symphony, Atlanta Symphony, Kansas City Symphony, and San Antonio Symphony; debuts with the Philharmonia Orchestra, Oslo Philharmonic, Warsaw Philharmonic, Basel Symphony and Staatskapelle Weimar, as well as a return to the City of Birmingham Symphony Orchestra. Highlights in recent seasons include debuts with the Budapest Festival Orchestra as soloist in the Beethoven Concerto, conducted by Janowski; return engagements with the Philadelphia Orchestra, both at home, and at Carnegie Hall; and his return to the London Chamber Orchestra to play-direct.

In recital and chamber music, Beilman performs regularly at the major halls across the world, including Carnegie Hall, Lincoln Center, Concertgebouw Amsterdam, Kölner Philharmonie, Berlin Philharmonie, Wigmore Hall, Louvre (Paris), Bunka Kaikan (Tokyo) and at festivals he has performed at Verbier, Aix-en-Provence Easter, Prague Dvorak, Robeco Summer Concerts (Amsterdam), Music@Menlo, Marlboro and Seattle Chamber Music, amongst others. In early 2018 he premiered a new work dedicated to the political activist Angela Davis written by Frederic Rzewski and commissioned by Music Accord which he has performed extensively across the US.

Beilman studied with Almita and Roland Vamos at the Music Institute of Chicago, Ida Kavafian and Pamela Frank at the Curtis Institute of Music, and Christian Tetzlaff at the Kronberg Academy, and has received many prestigious accolades including a Borletti-Buitoni Trust Fellowship, an Avery Fisher Career Grant and a London Music Masters Award. He has an exclusive recording contract with Warner Classics and released his first disc Spectrum for the label in 2016, featuring works by Stravinsky, Janáček and Schubert. Beilman plays the “Engleman” Stradivarius from 1709 generously on loan from the Nippon Music Foundation. 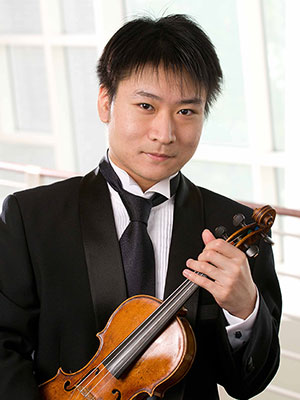 At the age of six, Haoming Xie began his violin study with Guo Guo-Guang. Xie later studied with renowned professor Lin Yao-Ji of Central Conservatory of Music and with Chai Liang and Yu Bing. Xie also received instruction from renowned violinists Joseph Silverstein, Pinchas Zukerman, Augustin Dumay, Midori, and others, and got high praise.” Xie is one of the most talented young violinists of his generation,” remarked Jaime Laredo.

At age 18 he performed a solo at the 2008 Beijing Olympic Celebration Concert. In 2007 he performed and recorded “Les Argeges” by Wieniawski and Paganini’s Caprice #24 in recital and at the Avsharian studio at The Meadowmount School of Music in New York. He participated in and was interviewed at a special 2010 Christopher Hogwood baroque musicmaster class in Beijing. In 2011 he performed Tchaikovsky with the Shanghai Philharmonic Orchestra with conductor Zhang Zhenshan at the Fete de la Musique in Shanghai, and that same year he appeared as a featured soloist in a celebration concert for Professor Lin Yaoji’s Achievements in Violin Education. 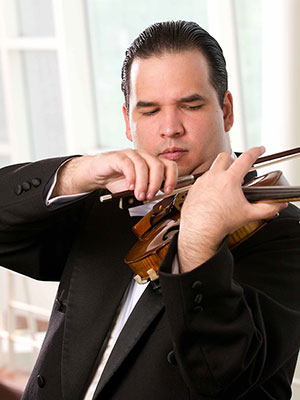 Antal Zalai was born into a musical family in Budapest, began to play the violin at the age of five, and won his first competition three years later. Recognized as a child prodigy, at age eleven Antal performed Mozart’s Violin Concerto in A major with the Franz Liszt Chamber Orchestra.

He received his initial musical training in Budapest from László Dénes, Péter Komlós (1st violinist of the Bartók Quartet), and furthered his violin studies under Pinchas Zukerman at the Manhattan School of Music and Kati Sebestyén at the Royal Conservatory of Brussels, winning the “Lecrinier” and “Darche” prizes upon graduation.

At age 15, Antal performed the Bartók Violin Concerto No. 1 at Lord Yehudi Menuhin’s 80th anniversary tribute, after which Menuhin called him “one of the most wonderful young violinists I have ever heard.” He was also invited to play for Leopold Auer’s anniversary tribute recital at the St. Petersburg Academic Philharmonia, for Prince Charles as a recipient of the Sir George Solti Foundation Scholarship at Kensington Palace in London, and at the Chi Mei Museum in Taiwan, playing the 1722 “ex-Mischa Elman” Stradivarius from the Museum’s collection.

Antal has performed nearly twenty five violin concertos ranging from Bach to Nielsen, Khachaturian and Bartók. Besides the standard repertoire, Antal has thematic violin recital programs, such as “Opera on Four Strings,” “Gershwin and More; Classic and Jazz,” “1944,” and “Magyar Magic.” Norwegian composer Filip Sande dedicated his Violin Concerto Op. 69 to him in 2007.

Antal has received exceptional acclaim as a recording artist since the release of his debut album of solo pieces by BMC Records. The album received a 10/10 review from Classics Today and earned praise from BBC Music Magazine, Gramophone and Diverdi. His tribute album to Leopold Auer released by Hungaroton Classic is described by Fanfare Magazine, “At times Zalai plays with the aristocratic aplomb of Milstein – and with a tonal luster to match.” His recording released by Brilliant Classics in 2010 features George Enescu’s violin sonatas accompanied by József Balog, with whom he has played since he was eight years old. His most recent recording is a 3-CD boxed set for Brilliant Classics of the complete music of Béla Bartók for violin and piano.

He has played in such prestigious venues as Carnegie Hall, Weill Recital Hall in New York City, Kennedy Center Terrace Theater in Washington, the Grand Hall of the Moscow Conservatory, Victoria Hall in Geneva, the Concert Hall of the Royal Conservatory of Brussels and the Chan Centre for the Performing Arts in Vancouver as a recitalist.

His thoughtful musicianship and consummate technical command were hailed by some of the world’s greatest musicians such as Yehudi Menuhin, Isaac Stern, Pinchas Zukerman, Shlomo Mintz, Fabio Luisi, Erick Friedman, Tibor Varga as well as audiences around the world. 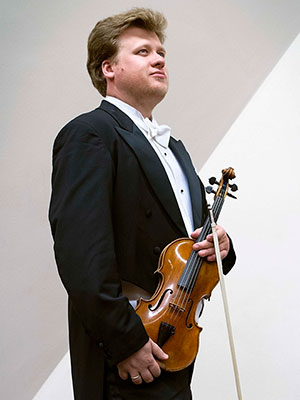 Andrey Baranov is winner of the Queen Elisabeth, the Benjamin Britten, and the Henri Marteau International Violin competitions, and is prizewinner of more than twenty other international competitions including the Indianapolis, Seoul, Sendai, Liana Isakadze, David Oistrakh, and Paganini (Moscow).

Born in St. Petersburg in 1986 into a family of musicians, Andrey began playing the violin at the age of five. He attended the Rimsky-Korsakov Conservatory in St. Petersburg and Conservatoire de Lausanne. He studied with L. Ivaschenko, V. Ovcharek, P. Popov, and the legendary French violinist Pierre Amoyal. Andrey also has taken masterclasses from B. Kushnir, L. Isakadze, and K. Kashkashian, among many others.

At the age of only 23 Andrey was appointed as teaching assistant to Pierre Amoyal at the Conservatoire de Lausanne and has since been in demand as a teacher at many international masterclasses. He has been invited to institutions in Chicago, Bangkok, Riga, Vilnius, Stockholm, Manchester, Moscow, and more.

In 2011 Andrey was invited by maestro Teodor Currentzis to join MusicAeterna symphony orchestra in Perm State Theater as guest concertmaster.

Andrey is first violinist of the David Oistrakh Quartet, an outstanding ensemble established in 2012.

Andrey is grateful to have been lent various great violins. At the Queen Elisabeth Competition he performed on a Poggi (1947) “ex-Milstein” violin on loan from the Munetsugu Hall – Yellow Angel Foundation in Japan, and upon winning the first prize Andrey received the Stradivarius violin (1708) “Huggins” which is currently on loan from Nippon Music Foundation.