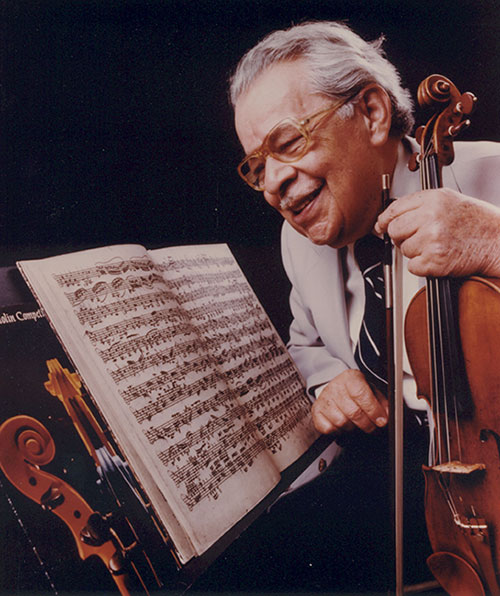 Josef Gingold was born in 1909 in Brest-Litovsk, Poland. The sixth and youngest child in his family, he learned to play the violin at an early age. In May 1920, with his family, he immigrated to New York where he began studies with Vladimir Graffman. Gingold credited Graffman with “opening his mind” to the potential of the violin.

In 1927, a year after his debut at New York City’s Aeolian Center, Gingold and his mother set sail for Europe. Gingold arrived in Brussels in May, where he began studies with the Belgian master and virtuoso Eugene Ysaÿe. Gingold once said of his return to the United States in 1929 that he not only returned a better musician but a better man–having learned from Ysaÿe the importance of striving for beauty in both music and in personal relations. “Never was the violin treated brutally,” Gingold said.

In the 1930s, Gingold played in the orchestras of three Jerome Kern musicals, and one each of Rogers and Hart and Cole Porter, as a struggling musician in Depression-era America. In 1937, he auditioned for Arturo Toscanini and won a spot in the NBC Symphony Orchestra.

After seven years with the legendary conductor, Gingold was offered the position of Concertmaster and occasional soloist with the Detroit Symphony Orchestra. He remained with the Detroit Symphony until 1947, when George Szell asked him to accept the position of concertmaster with the Cleveland Orchestra. Gingold later said that Szell had the greatest influence on him as a musician and teacher.

It was during this time that Gingold developed his reputation as an accomplished teacher and performer at Case Western Reserve University, The Cleveland Music School Settlement, and numerous other schools across the country. He was Concertmaster of the June Music Festival in New Mexico for twenty-five years and headed the Chamber Music Series at the Meadowmount School of Music in New York state for thirty summers.

Gingold remained with the Cleveland Orchestra until 1960, when he joined the music faculty at Indiana University and was later named Distinguished Professor. He compiled and edited Orchestral Excerpts consisting of 300 works in the symphonic repertoire, published by the International Music Company of New York. The three-volume work is a standard text used by students and symphonists worldwide.

Professor Gingold represented the United States on the juries of all major international competitions including the Queen Elisabeth, Wieniawski, Paganini, Sibelius, Nielsen, Naumberg, Leventritt, and Tchaikovsky.

In 1982, the International Violin Competition of Indianapolis was founded under the artistic guidance of Josef Gingold. He helped to establish its repertory, choose the jurors, and shape its protocol, setting the standard for future competitions worldwide. In 1994, Professor Gingold stepped down as President of the Jury by bestowing the honor to his student, friend and colleague, Jaime Laredo.

The Josef Gingold Fund is an endowment fund that was established in 1985 with an initial gift from the Krannert Charitable Trust.  The endowment was created to secure the financial base for The Indianapolis for generations to come and ensure its place as an industry leader worldwide.

If you would like to make a gift to the endowment or become a member of the Josef Gingold Society which honors donors who include the Josef Gingold Fund in their estate plans, please call the Competition office at 317-637-4574 or email Director of Development Mary Jane Sorbera (maryjane@violin.org).

Josef Gingold influenced thousands of musicians from around the world through a lifetime of teaching. In an effort to preserve his legacy, the International Violin Competition of Indianapolis is compiling a record of Mr. Gingold’s former students.

If you are a former student and would like to be included in this formal listing, please e-mail us at kwok@violin.org.