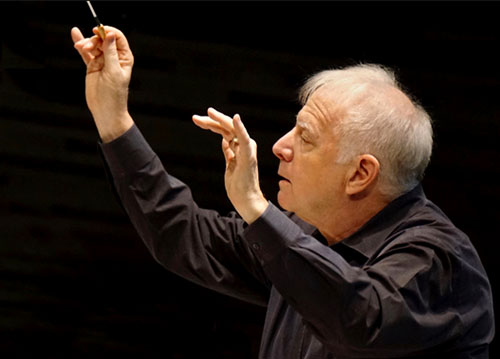 In 2017-18, internationally acclaimed conductor Leonard Slatkin celebrates his tenth and final season as Music Director of the Detroit Symphony Orchestra (DSO), and his first season in the new role of Directeur Musical Honoraire with the Orchestre National de Lyon (ONL). He also welcomes the publication of his second book, “Leading Tones: Reflections on Music, Musicians, and the Music Industry,” and serves as jury chairman of the Besançon International Competition for Young Conductors. His guest-conducting schedule includes engagements with the St. Louis Symphony, National Symphony Orchestra, New York Philharmonic, Polish National Radio Orchestra, Deutsches Symphonie-Orchester Berlin, and Finnish Radio Symphony Orchestra. Recent career highlights include a three-week tour of Asia with the DSO; tours of the U.S. and Europe with the ONL; a winter Mozart Festival in Detroit; and engagements with the St. Louis Symphony, WDR Symphony Orchestra in Cologne, Verdi Orchestra in Milan, and San Carlo Theatre Orchestra in Naples. Moreover, he served as chairman of the jury and conductor of the 2017 Van Cliburn International Piano Competition.

Slatkin has received six Grammy awards and 33 nominations. His recent recordings include works by Saint-Saëns, Ravel, and Berlioz (with the ONL) and music by Copland, Rachmaninov, Borzova, McTee and John Williams (with the DSO). In addition, he has recorded the complete Brahms, Beethoven and Tchaikovsky symphonies with the DSO (available online as digital downloads) and conducted the London Symphony Orchestra for an album featuring violinist Anne Akiko Meyers.

A recipient of the National Medal of Arts, the highest award given to artists by the United States government, Slatkin also holds the rank of Chevalier in the French National Order of the Legion of Honor. Moreover, he has received Austria’s Decoration of Honor in Silver, the League of American Orchestras’ Gold Baton Award, and the 2013 ASCAP Deems Taylor Special Recognition Award for his debut book, “Conducting Business.” He holds honorary doctorates from many institutions, including The Juilliard School, New England Conservatory, Michigan State University, Indiana University, the University of Rochester, the University of Maryland-College Park, George Washington University, the University of Missouri-St. Louis, and Washington University in St. Louis.

Founder and former director of the St. Louis Symphony Youth Orchestra and National Conducting Institute in Washington, D.C., Slatkin remains a passionate music educator. He has conducted and taught at such institutions as the Manhattan School of Music, The Juilliard School, the Aspen Music School, the Jacobs School of Music at Indiana University, the National Orchestral Institute, the Music Academy of the West, and the New World Symphony.

Born in Los Angeles to a distinguished musical family, he is the son of violinist-conductor Felix Slatkin and cellist Eleanor Aller, founding members of the famed Hollywood String Quartet. He began his musical training on the violin and first studied conducting with his father, followed by Walter Susskind at Aspen and Jean Morel at Juilliard. He is the father of one son, Daniel, and makes his permanent home in Bloomfield Hills, Michigan with his wife, composer Cindy McTee.