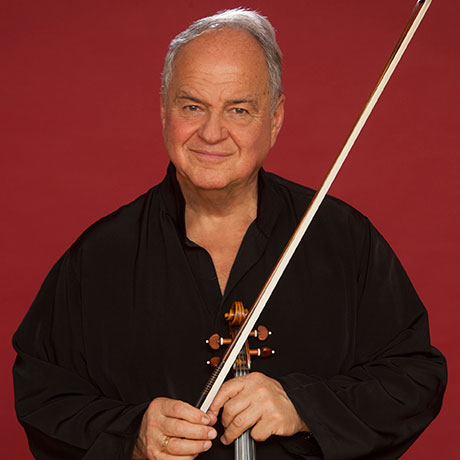 Performing for over six decades before audiences across the globe, Jaime Laredo has excelled in the multiple roles of soloist, conductor, recitalist, pedagogue and chamber musician. Since his stunning orchestral debut at the age of eleven with the San Francisco Symphony, he has won the admiration and respect of audiences, critics and fellow musicians with his passionate and polished performances. That debut inspired one critic to write: “In the 1920’s it was Yehudi Menuhin; in the 1930’s it was Isaac Stern; and last night it was Jaime Laredo.” His education and development were greatly influenced by his teachers Josef Gingold and Ivan Galamian, as well as by private coaching with eminent masters Pablo Casals and George Szell. At the age of seventeen, Jaime Laredo won the prestigious Queen Elisabeth of Belgium Competition, launching his rise to international prominence. With 2009 marking the 50th anniversary of his prize, he was honored to sit on the Jury for the final round of the Competition.

In the 2017-18 Season, Mr. Laredo tours the United States as conductor, soloist and as a member of the award-winning Kalichstein-Laredo-Robinson Trio, which continues its 40th Anniversary celebration. This season on violin, he reprises André Previn’s Double Concerto for Violin and Cello, with his wife, cellist Sharon Robinson in Vermont. Performances of this work have received raves since its 2016 premiere. It was commissioned specifically for the duo by the Cincinnati, Kansas City, Austin, Detroit, Pacific and Toronto symphony orchestras, as well as the Deutsche Kammerphilharmonie Bremen and the Swedish Chamber Orchestra. A new double concerto by Chris Brubeck is their next collaboration. Additionally, Laredo’s remarkable sound can be heard on viola in Mozart’s Sinfonia Concertante on tour throughout Vermont and at Carnegie Hall with Pamela Frank, his friend and onetime student.

Mr. Laredo will also continue to tour and record as a member of the Kalichstein-Laredo-Robinson Trio. Founded by Mr. Laredo, Sharon Robinson, and pianist Joseph Kalichstein in 1976, the Kalichstein-Laredo-Robinson Trio celebrates their 40th Anniversary with the Beethoven Trio cycle and a specially commissioned work entitled, Pas de Trois written for them by Pulitzer Prize-winning composer Ellen Taaffe Zwilich; this season’s performances of the work include the La Jolla Music Society SummerFest and Chamber Music Society of Lincoln Center in New York. The Trio performs regularly at Lincoln Center, Carnegie Hall, the 92nd Street Y, and Town Hall in New York, and at the Kennedy Center where they are the ensemble in residence. They have toured internationally to cities that include Lisbon, Hamburg, Copenhagen, London, Paris, Amsterdam, Vienna, Helsinki, Buenos Aires, Tokyo, Seoul, Sydney, and Melbourne. Among its numerous awards, the Trio was named Musical America’s Ensemble of the Year in 2002. In addition to his performing work, Mr. Laredo’s season includes conducting engagements with the Vermont Symphony, the Westchester Philharmonic, and at Carnegie Hall with the New York String Orchestra. 2017 also marks the sixth year of Laredo’s tenure as a member of the violin faculty at the Cleveland Institute of Music.

In past seasons, Mr. Laredo and Ms. Robinson performed in recital in the U.S., Canada and on tour in Bolivia, including performances of Richard Danielpour’s Inventions on a Marriage. The 2011 work was commissioned specifically for the duo and was dedicated to and inspired by their marriage, and explores in “musical snapshots” the bond of long-term relationships.

Recent conducting and solo engagements have taken Laredo to the Chicago Symphony Orchestra, the Detroit Symphony, the New World Symphony and the Scottish Chamber Orchestra in addition to the New York String Orchestra at Carnegie Hall, the Vermont Symphony and Westchester Philharmonic. Festival engagements have taken him across the globe from the Chautauqua Music Festival in New York to Seoul Spring Festival in Korea.

A recent project titled “Two x Four” celebrated the relationship between the teacher and the student through music. With his colleague and former student Jennifer Koh, Mr. Laredo and Ms. Koh performed the Double Concerti for Two Violins by J.S. Bach, Philip Glass, and two newly commissioned concerti by composers Anna Clyne and David Ludwig with the Delaware Symphony, the IRIS orchestra, Chicago Symphony, Vermont Symphony, Los Angeles Chamber Orchestra, and with the Curtis Orchestra on tour at the Kimmel Center in Philadelphia, Kennedy Center and the Miller Theater of Columbia University. The recording of this acclaimed project was released by Cedille Records in 2014.

Other conducting and performing highlights include the Chicago Symphony, Boston Symphony Orchestra, Seattle Symphony, Los Angeles Philharmonic, New York Philharmonic, San Francisco Symphony, Pittsburgh Symphony, Detroit Symphony, St. Louis Symphony, Cleveland Orchestra and Philadelphia Orchestra, among many others. Abroad, he has performed with the London Symphony, the BBC Symphony, the English Chamber Orchestra, the Academy of St. Martin in the Fields, the Royal Philharmonic and the Scottish Chamber Orchestra, which he led on two American tours and in their Hong Kong Festival debut. His numerous recordings with the SCO include Vivaldi’s Four Seasons (which stayed on the British best-seller charts for over a year), Mendelssohn’s A Midsummer Night’s Dream, “Italian” and “Scottish” symphonies, Beethoven’s Violin Concerto and recordings of Rossini overtures and Wagner’s Siegfried Idyll.

For fifteen years, Mr. Laredo was violist of the piano quartet consisting of renowned pianist Emanuel Ax, celebrated violinist Isaac Stern, and distinguished cellist Yo-Yo Ma, his close colleagues and chamber music collaborators. Together, the quartet recorded nearly the entire piano quartet repertoire on the SONY Classical label, including the works of Beethoven, Mozart, Schumann, Fauré and Brahms, for which they won a Grammy Award.

Mr. Laredo has recorded close to one hundred discs, received the Deutsche Schallplatten Prize, and has been awarded seven Grammy nominations. Mr. Laredo’s discs on CBS and RCA have included the complete Bach Sonatas with the late Glenn Gould and a KOCH International Classics album of duos with Ms. Robinson featuring works by Handel, Kodály, Mozart and Ravel. His releases on the Dorian label include Schubert’s complete works for violin and piano with Stephanie Brown, and “Virtuoso!”, a collection of favorite violin encores with pianist Margo Garrett. Other releases include Mozart’s Sinfonia Concertante and Concertone with Cho-Liang Lin for Sony. Acclaimed Kalichstein-Laredo-Robinson Trio releases include complete trios and sonatas of Shostakovich, complete chamber works of Maurice Ravel, a four-disc set of the complete Brahms Piano Trios, a set of complete Beethoven Piano Trios and complete Schubert Piano Trios. The Trio’s most recent release on Azica, “Passionate Diversions,” includes the Piano Trio, Septet and Quintet written for them by Ellen Taaffe Zwilich. Mr. Laredo has also released an album with Sharon Robinson and the Vermont Symphony entitled “Triple Doubles,” which includes three double concertos dedicated to the Duo: Daron Hagen’s Masquerade; a new, fully-orchestrated version of Richard Danielpour’s A Child’s Reliquary (originally written as a piano trio for the Kalichstein-Laredo-Robinson Trio); and David Ludwig’s Concerto for Violin, Cello and Orchestra. Both albums were released by BRIDGE in November 2011.

Recognized internationally as a sought after violin teacher, Mr. Laredo has fostered the education of violinists that include Leila Josefowicz, Hilary Hahn, Jennifer Koh, Ivan Chan, Soovin Kim, Pamela Frank and Bella Hristova. After 35 years of teaching at the Curtis Institute of Music in Philadelphia, seven years at the Indiana University Jacobs School of Music, Mr. Laredo began teaching at the Cleveland Institute of Music in 2012, where his wife cellist Sharon Robinson also holds a teaching position. Additionally, Mr. Laredo is the conductor of the New York String Orchestra at Carnegie Hall, which brings young musicians from around the world to the stage every December.

In demand worldwide as a conductor and a soloist, Mr. Laredo has held the position of Music Director of the Vermont Symphony Orchestra since 1999 and serves as Principal Conductor of the Westchester Philharmonic. In 2009, Mr. Laredo and his wife were named the Artistic Directors of the Linton Chamber Music Series in Cincinnati, Ohio.

During his 39 years as Artistic Director for New York’s renowned Chamber Music at the Y series, Mr. Laredo created an important forum for chamber music performances, and developed a devoted following. Further, his stewardships of the annual New York String Orchestra Seminar at Carnegie Hall and the International Violin Competition of Indianapolis have become beloved educational pillars of the string community. A principal figure at the Marlboro Music Festival in years past, he has also been involved at Tanglewood, Aspen, Ravinia, Mostly Mozart, and the Hollywood Bowl, as well as festivals in Italy, Spain, Finland, Greece, Israel, Austria, Switzerland and England.