“…music-making of unusually high quality – the sort of playing which comes only from understanding, love, painstaking care, and, quite simply, great ability.”
– The Guardian, London

Performing for over six decades before audiences across the globe, Jaime Laredo has excelled in the multiple roles of soloist, conductor, recitalist, pedagogue and chamber musician. Since his stunning orchestral debut at the age of 11 with the San Francisco Symphony, he has won the admiration and respect of audiences, critics and fellow musicians with his passionate and polished performances. That debut inspired one critic to write: “In the 1920s it was Yehudi Menuhin; in the 1930s it was Isaac Stern; and last night it was Jaime Laredo.” His education and development were greatly influenced by his teachers Josef Gingold and Ivan Galamian, as well as by private coaching with eminent masters Pablo Casals and George Szell. At the age of 17, Jaime Laredo won the prestigious Queen Elisabeth of Belgium Competition, launching his rise to international prominence. With 2009 marking the 50th anniversary of his prize, he was honored to sit on the jury for the final round of the Competition and has returned to serve on the jury in subsequent seasons.

In the 22/23 season, Laredo tours the United States as conductor, soloist and chamber musician. Conducting engagements bring Laredo to Carnegie Hall in addition to appearances with several orchestras as conductor/soloist in the Northeast. As chamber musician, Laredo will appear with his wife, cellist Sharon Robinson, in numerous performances which will honor the late Joseph Kalichstein, with whom the two performed as The Kalichstein-Laredo-Robinson Trio for over 45 years. Highlights of this season include performances across the nation with violist/composer Nokuthula Ngwenyama and her commissioned piano quartet, Elegy, written specifically for them in response to the tragic events of 2020, as well as the New York premiere of Abgang and Kaddish by Pulitzer Prize-winning composer Ellen Taaffe Zwilich.

Other conducting and performing highlights include the Chicago, Boston, Pittsburgh, and San Francisco symphonies, Los Angeles and New York philharmonics, and the Cleveland and Philadelphia orchestras, among many others. Acclaimed premieres of Double Concertos by André Previn and Christopher Brubeck, written specifically for Laredo and Sharon Robinson, are particularly memorable. Abroad, he has appeared with the London and BBC Symphonies, and the Scottish Chamber Orchestra, with which he made numerous best-selling recordings, as well as orchestras in France, Hong Kong and Japan.

Laredo has recorded nearly one hundred discs, including a Grammy Award-winning disc of Brahms Piano Quartets with Emanuel Ax, Isaac Stern and Yo-Yo Ma. His recordings range from the complete Bach Sonatas with Glenn Gould (SONY Classical) to recent premiere recordings of double concertos with violinist Jennifer Koh, 2×4 (Cedille Records) and with Sharon Robinson, Triple Doubles (BRIDGE), and award-winning recordings with The Kalichstein-Laredo-Robinson Trio. Forthcoming in 2023 is the Signum Records premiere release of Stanley Silverman’s Trio No. 2, Reveille with special guest Sting. In 2021, Laredo’s extraordinary recorded legacy was celebrated with the release of a 23-CD Box set on Sony Classical.

Laredo and Robinson have greatly added to the double concerto canon with works written specifically for them by Richard Danielpour, David Ludwig, André Previn, Ned Rorem, Chris Brubeck and Ellen Taaffe Zwilich, among others. In past seasons, Mr. Laredo and Ms. Robinson performed in recital in the United States, Canada and on tour in Bolivia, including performances of Richard Danielpour’s Inventions on a Marriage. The 2011 work was commissioned specifically for the duo and was dedicated to and inspired by their marriage and explores in “musical snapshots” the bond of long-term relationships.

Laredo’s stewardships of the annual New York String Orchestra Seminar at Carnegie Hall and the International Violin Competition of Indianapolis have become beloved educational pillars of the string community. He is co-Artistic Director of Cincinnati’s Linton Chamber Music and the Hudson Valley Chamber Music Circle. He recently completed twenty years as Music Director of the Vermont Symphony and held the post of Artistic Director of the Chamber Music at the Y series in New York for forty years, where he created an important forum for chamber music performances and developed a devoted following. 2022 marks Laredo’s 11th year on faculty at the Cleveland Institute of Music.

A principal figure at the Marlboro Music Festival in years past, he has also been involved at Tanglewood, Aspen, Ravinia, Mostly Mozart, and the Hollywood Bowl, as well as festivals in Italy, Spain, Finland, Greece, Israel, Austria, Switzerland, England, Korea and Taiwan.

Born in Bolivia, Jaime Laredo resides in Vermont and Ohio with his wife, cellist Sharon Robinson. 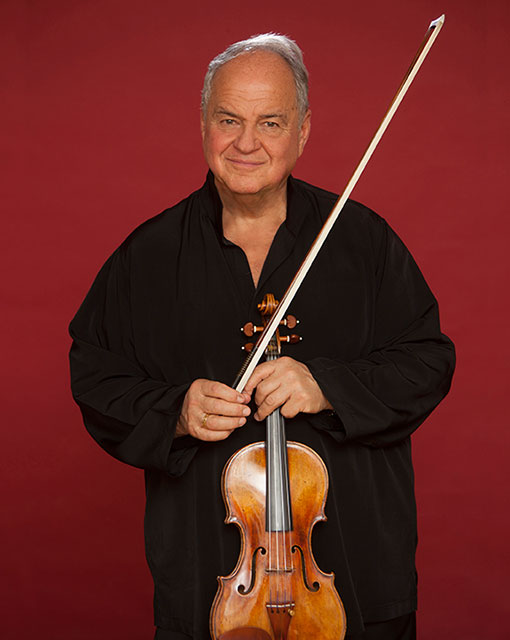