Violinist Liviu Prunaru won the Silver Medal at the 1998 International Violin Competition of Indianapolis, which garnered him a review from The Strad including “Technical mastery…he can turn a single phrase with one note.” He gained international recognition through his participation at several prestigious violin competitions winning Gold Medals at the Dong-A competition in Korea, the Rodolfo Lipizer in Italy, and the R. Molinari Violin Competition in Switzerland, in addition to a Silver Medal at the Queen Elisabeth in Brussels. After capturing First Grand Prize at the E. Nakamichi Wieniawski Violin Competition and the Juilliard Mendelssohn Competition, Prunaru made his New York City debut in 1999 with the Juilliard Symphony at Alice Tully Hall.

Liviu Prunaru has performed recitals in many of the world’s major cultural centers and has been a featured soloist with orchestras including the Royal Philharmonic, the London Symphony, Belgium National, Bucharest Radio-Symphony, and the Puchon Philharmonic in Korea. His work has also been in demand at renowned festivals including the Menuhin, Brussels, Buenos Aires, Evian, Athens and Salzburg festivals. Prunaru can be heard on CD with Camerata Lysy, as well as his own debut CD released by Pavane Records. He recently released a disc on the Swiss label Claves which includes the three violin concertos by Camille Saint-Saëns, accompanied by the Ensemble Orchestral de Paris, directed by Lawrence Foster.

Born in Craiova, Romania, Mr. Prunaru studied at the renowned Menuhin Academy of Gstaad, Switzerland and completed his professional studies at The Juilliard School where he was an assistant to Dorothy DeLay and actively participated in master classes with Itzhak Perlman. Currently a professor at the Menuhin Academy in Switzerland, Mr. Prunaru is also Concertmaster of the Concertgebouw Orchestra in Amsterdam.

He performs on a 1676 Guarneri violin graciously loaned to him by Professor M. Muller. 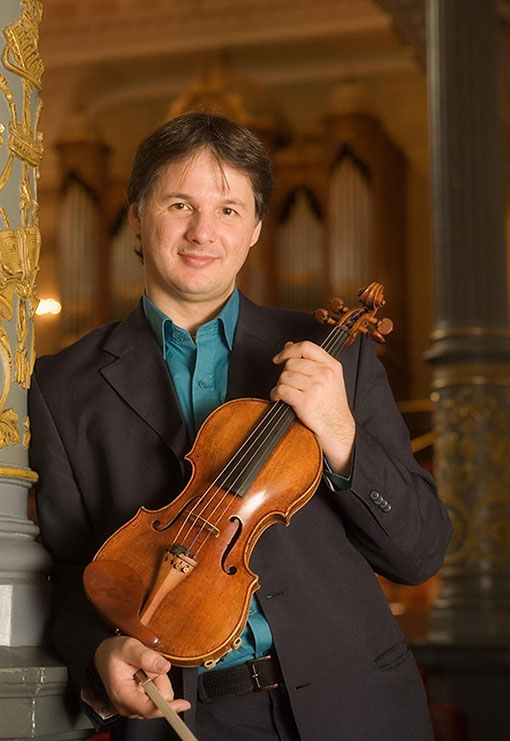