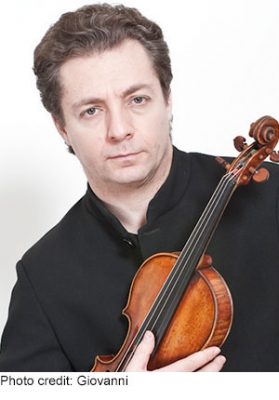 Pavel Berman attracted much attention when he won the First Prize and Gold Medal at the International Violin Competition of Indianapolis in 1990. He was born in Moscow, where he studied at the Tchaikovsky Conservatory. At the age of seven Mr. Berman made his public debut. At the age of seventeen, he won the Second Prize at the 1987 Paganini International Violin Competition in Genoa, Italy. While performing internationally, in 1992 he moved on to study with Dorothy DeLay at The Juilliard School in New York and later with Isaac Stern.

Among the other projects, Mr. Berman performed a recital tour in Japan in 2010-2011 as well as a tour in Italy as a soloist and conductor with the Mantua Chamber Orchestra. He also appeared as a soloist with “La Fenice” Orchestra of Venice under Yutaka Sado and as a conductor with Orchestra RAI of Turin. After recording the Prokofiev Violin Sonatas and 5 Melodies with pianist Vardan Mamiconian, Mr. Berman completed a Prokofiev project with “Dynamic” by recording both violin concertos with Radio Orchestra of Lugano under Andrei Boreiko. He also recorded a Schumann sonata with Alexander Mikhailuk, works by Bloch and Shostakovich with Anne Epperson, and the Mozart and Beethoven Sonatas with his father Lazar Bermann. Mr. Berman also recorded a video rendition of Paganini 24 Caprices in double version: for violin solo on Guarneri del’Gesu ex-Cesoul and a exclusive Violin and String Orchestra version by Giedrius Kuprievicius on Stradivari “Marèchal Berthier.”

Mr. Berman has recorded for Koch International, Audiofon, Discover, Supraphon and Phoenix Classics and Dynamic. He teaches in Lugano and performs on the Antonio Stradivari violin, Cremona 1702 ‘ex David Oistrach’ lent to him by the Pro Canale Foundation, Milan. 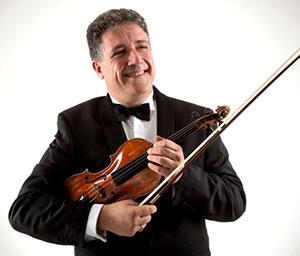 A prize-winner at three of the most prestigious international violin competitions – the Tchaikovsky Competition in Moscow, Queen Elizabeth in Brussels and the Indianapolis – Marco Rizzi has soon been recognized as one of the most interesting young violinists of his generation and was awarded the Europäischen Musikförderpreis on the recommendation of Claudio Abbado.

Marco Rizzi is regarded as one of the most appreciated musicians from Italy. He regularly appeared in leading concert halls such as Teatro alla Scala in Milan, Salle Gaveau and Salle Pleyel in Paris, Lincoln Center in New York, the Concertgebouw in Amsterdam, the Philharmonic Society of Brussels, the Great Hall of Moscow Conservatory, the Hamburger Musikhalle, the Berlin Konzerthaus and the Tivoli of Copenhagen. He worked with such notable conductors as R. Chailly, G. Noseda, A. Ceccato, P. Eötvös, V. Jurowski, S. Denéve, G. Neuhold and was soloist with orchestras such as the Staatskapelle Dresden, Indianapolis Symphony Orchestra, Netherlands Chamber Orchestra, Royal Liverpool Philharmonic, Hong Kong Philharmonic, Orchestre de Concerts Lamoureux, Rotterdam Philharmonic, Orquesta RTVE of Madrid, BBC Scottish, Netherlands Philharmonic, Orchestra Sinfonica di Milano ‘G.Verdi’, Radio Chamber Orchestra Holland, and many others.

Rizzi resides in Germany, leading an international class first at the Hochschule für Musik -Detmold (Germany) (1999 -2008). In October 2008 he was appointed at the Hochschule für Musik in Mannheim and since September 2007 he is also professor at the renomated Escuela Superior de Musica Reina Sofia in Madrid. His students have been prize-winners in important international competitions. He is also regularly serving as juror in some of the most prestigious violin competitions, such as the Queen Elisabeth Competition (Bruxelles), the Joachim Violin Competition (Hannover) or the Paganini Violin Competition (Genova). 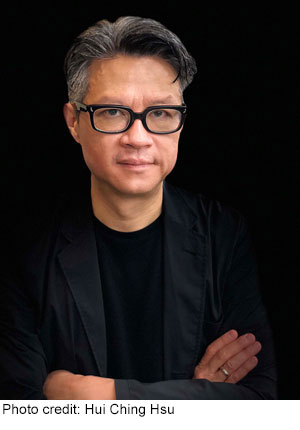 Ivan Chan was born in Hong Kong, where he received his early training with Thomas Wang. He made his debut with the Hong Kong Philharmonic at the age of 13. Shortly thereafter, he continued his studies in the United States with Jascha Brodsky, David Cerone, Felix Galimir and Jaime Laredo at the Curtis Institute of Music, and with Miriam Fried at Indiana University.

Currently, Mr. Chan is Associate Professor of Music at the Hong Kong Academy for Performing Arts, where he teaches chamber music, violin and viola. His students have won positions in major orchestras and top prizes in competitions such as the Hong Kong Philharmonic, Hangzhou Philharmonic Orchestra, Xuzhou Symphony, Buffalo Philharmonic, St. Louis Symphony, Alice and Eleanore Schoenfeld International Competition, Shanghai Conservatory Chamber Music Competition and the Salzburg-Mozart International Chamber Music Competition. As a visiting artist, he has taught at the Curtis Institute of Music, Juilliard School, New England Conservatory, Cleveland Institute of Music, University of Missouri in Kansas, Western Michigan University, Shanghai Conservatory of Music, Central Conservatory of Music in Beijing, Encore School for Strings, Meadowmount School of Music, Heartland Chamber Music Festival and Morningside Music Bridge. Mr. Chan coaches regularly at prominent festivals such as the Heifetz International Music Institute, Music@Menlo Chamber Music Institute, Kent Blossom Music Festival and New York String Orchestra Seminar. As an adjudicator, he has served on the jury panel of competitions including the Julius Stulberg Auditions and Annual Concerto Competition of the New World Symphony. He was as a member the International Violin Competition of Indianapolis screening committee in 2010, 2014 and 2018.

From 1995 to 2010, Mr. Chan was a member of the acclaimed Miami String Quartet. Winner of the prestigious Cleveland Quartet Award, the MSQ appeared regularly on premier series and festivals throughout the United States such as Lincoln Center Chamber Music Society, Philadelphia Chamber Music Society, Cleveland Chamber Music Society, as well as Santa Fe, La Jolla, Angel Fire, Kent Blossom and Music@Menlo festivals among others. The Miami Quartet was featured on prominent live radio programs including National Public Radio’s “St. Paul Sunday Morning” and “Performance Today”. Mr. Chan’s performances with the Miami String Quartet can be heard on recordings under the BMG/Conifer and CRI labels. 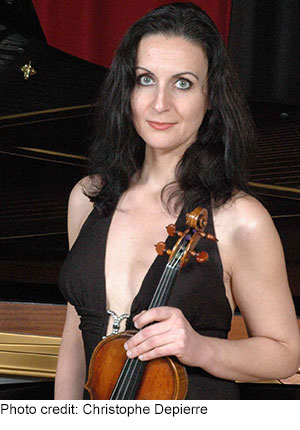 Ms. Robilliard made her New York debut at the age of 19, in a critically acclaimed performance (The New York Times) of Bartók’s Violin Concerto No. 2, conducted by Stanislaw Skrowaczewski at Avery Fisher Hall. Miss Robilliard’s international career has included appearances in Asia, South America, Europe, Canada, and the United States in major halls such as Carnegie Hall, the Salle Pleyel, the Teresa Carreño Theater, and the Théâtre des Champs-Elysées. She is regularly invited to give master classes all over the world. Her interest to present contemporary music has brought Ms. Robilliard, with the sponsorship of the Beracasa Foundation, to commission a Sonata for Violin Solo to a brilliant Venezuelan composer, Paul Desenne. The piece was created in Caracas (1998) and London (1999). More recently, she created his “2 seasons” for chamber orchestra and violin solo, also critically acclaimed by The New York Times in 2008. In her first CD released by the XCP label, she is joined by her brother, pianist and composer Bruno Robilliard, performing Sonatas by Fauré, Schumann, and Robilliard. In 2006, her “live” DVD with Brahms and Tchaikovsky’s violin Concertos was released with the Orquesta municipal de Caracas conducted by Rodolfo Saglimbeni. In 2010, Hungaroton’s label released her trio’s CD with Frédéric-Vaysse-Knitter at the piano and Peter Czabo at the cello, featuring works by Brahms and Dvořák.

Born into a family of musicians, Ms. Robilliard gave her first public concert at the age of five. She was awarded First Prize by the Conservatoire National Supérieur de Musique de Lyon at seventeen as a student of Jacques Ghestem, and she graduated from The Juilliard School in 1993 as a scholarship student of Dorothy DeLay. From 2001 to 2008, Ms. Robilliard, thanks to the Mozarteum Foundation, created a violin school in Caracas, Venezuela, where several of her young talented students were later accepted in European conservatories such as the CNSM in Paris, the Tibor Varga school, Hans Eisler Music School, and Geneva conservatory. 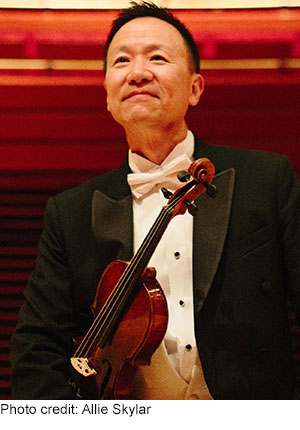 Violinist David Kim was named concertmaster of The Philadelphia Orchestra in 1999. Born in Carbondale, IL, in 1963, he started playing the violin at the age of three, began studies with the famed pedagogue Dorothy DeLay at the age of eight, and later received his bachelor’s and master’s degrees from the Juilliard School.

Each season Mr. Kim appears as a guest in concert with the famed modern hymn writers Keith and Kristyn Getty at such venues as the Grand Old Opry in Nashville, the Kennedy Center for the Performing Arts, and Carnegie Hall. In August he returns to Nashville to perform at the Getty Music Worship Conference—Sing! 2021. Mr. Kim serves as distinguished artist at the Robert McDuffie Center for Strings at Mercer University in Macon, GA. He frequently serves as an adjudicator at international violin competitions such as the Menuhin and Sarasate.

Mr. Kim has been awarded honorary doctorates from Eastern University in suburban Philadelphia, the University of Rhode Island, and Dickinson College.

His instruments are a J.B. Guadagnini from Milan, ca. 1757, on loan from The Philadelphia Orchestra, and a Michael Angelo Bergonzi from Cremona, ca. 1754. Mr. Kim resides in a Philadelphia suburb with his wife, Jane, and daughters, Natalie and Maggie. He is an avid golfer and outdoorsman. 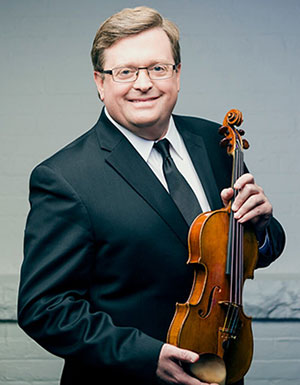 Martin Beaver was first violin of the world-renowned Tokyo String Quartet from June 2002 until its final concert in July 2013. As such, he appeared to critical and public acclaim on the major stages of the world, including Carnegie Hall, Wigmore Hall, the Berliner Philharmonie, Suntory Hall in Tokyo, and the Sydney Opera House.

Over the course of his career, Mr. Beaver has been the grateful recipient of generous support from the Canada Council for the Arts, including arts grants for his studies at Indiana University, career development grants, and the 1993 Virginia Parker Prize. In 1998, through the kindness of an anonymous donor, the Canada Council awarded Mr. Beaver the use of the 1729 “ex-Heath” Guarneri del Gesù violin for a four-year period.

A devoted educator, Mr. Beaver has conducted master classes throughout North America, South America, Europe, Asia, and Australia. He has held teaching positions at the Royal Conservatory of Music, the University of British Columbia, and the Peabody Conservatory. More recently, he served on the faculty of New York University and as artist-in-residence at the Yale School of Music, where he was awarded its highest honor, the Sanford Medal. He joined the faculty of the Colburn School Conservatory of Music in 2013 as Professor of Violin and served as Co-Director of String Chamber Music Studies from 2013–2018.

Mr. Beaver is proud to be a founding member of the Montrose Trio with pianist Jon Kimura Parker and cellist Clive Greensmith. Mr. Beaver plays a 1789 Nicola Bergonzi violin.