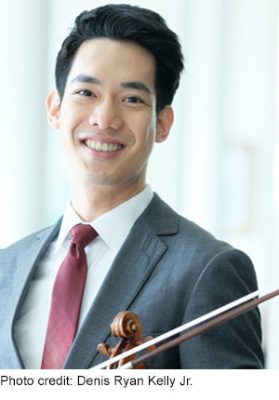 Taiwanese-American violinist Richard Lin is the Gold Medalist of the 10th Quadrennial International Violin Competition of Indianapolis, which took place in September of 2018.

Highlights of Mr. Lin’s 2021-2022 performances include concerts with the National Symphony Orchestra in Taiwan and a tour of Japan with the National Taiwan Symphony Orchestra.  In the United States, he will appear with the Baton Rouge Symphony and the Indianapolis Chamber Orchestra.  Multiple recitals in Taiwan, Texas, California, and Pennsylvania will culminate in a Carnegie Hall Stern Auditorium recital debut in June 2022.  Passionate about chamber music, Richard will will give concerts in the United States as a member of Chamber Music Society of Lincoln Center’s Bowers Program and perform at Music@Menlo.

He released his first album on the Fontec label in 2013 featuring works for violin and orchestra by Beethoven, Bartók and Brahms performed with the Sendai Philharmonic and conductor Pascal Verrot. The following year, he released the complete Brahms Sonatas for Piano and Violin with his brother, pianist Robert Lin.

Born in Phoenix, Arizona and raised in Taiwan, Richard began his violin studies at the age of four. He gave his public debut at age eleven performing the Saint-Saëns Violin Concerto No. 3 with the Taipei Symphony Orchestra. Richard graduated from the Curtis Institute of Music and The Juilliard School where he studied with Aaron Rosand and Lewis Kaplan respectively.  As part of his Indianapolis prize, Richard has the use of the 1683 “ex-Gingold” Stradivarius and 2017 Sam Zygmuntowicz for four years. 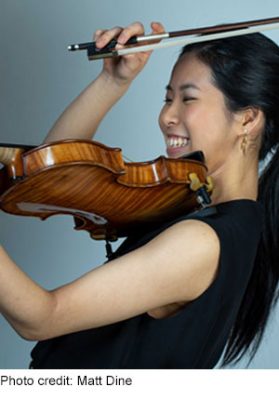 Risa Hokamura began violin at the age of three, and began to capture top prizes in competitions in Japan at age ten. She first came to international attention upon winning the Silver Medal at the 2018 International Violin Competition of Indianapolis, where she performed the Tchaikovsky Concerto with the Indianapolis Symphony conducted by Leonard Slatkin. In celebration of her medal, she returned to Indianapolis to perform a special “Gold, Silver and Bronze Medalists Debut” concert.

Ms. Hokamura won First Prize in the 2018 Young Concert Artists International Auditions at the age of seventeen. She follows in the distinguished footsteps of her two major violin teachers, who also began their careers with Young Concert Artists: Koichiro Harada (founding first violinist of the Tokyo String Quartet) and Mayuko Kamio. 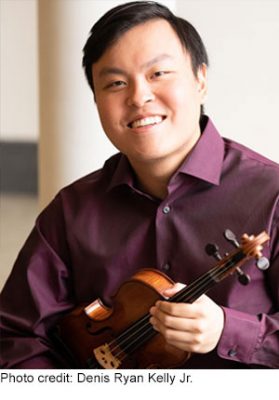 2018 Bronze Medalist, violinist and composer Luke Hsu is hailed as “in a class by himself with total command of the instrument” by the Montréal Gazette. As a soloist and recitalist, Luke has appeared at Wigmore Hall, St. John’s Smith Square, Windsor Castle, Kennedy Center, Herkulessaal, Jordan Hall and Teatro Carlo Felice, among many others. Additionally, he has performed as soloist with numerous orchestras around the world, including the Orchestre National de la Belgique, Royal Chamber Orchestra of Wallonia, Teatro Carlo Felice Genova Orchestra, the Houston, Dallas, Indianapolis, Auckland and Odense symphony orchestras, Poznan Philharmonic Orchestra, Amadeus Chamber Orchestra of Polish Radio, East Coast Chamber Orchestra, Royal Academy of Music Chamber Orchestra, and the Tongyeong Festival Orchestra. He has worked closely with eminent conductors including Leonard Slatkin, Nikolaj Znaider, Pascal Vierrot, Hugh Wolff, Marek Pijarowski, Jean-Jacques Kantarow and Cristian Macelaru. His performance with the Victoria Symphony Orchestra was recorded and broadcast on NPR’s Performance Today, and other performances have been broadcast on Canada’s CBC and Denmark’s DR. He has performed for royalty around the world including His Royal Highness The Earl of Wessex Prince Edward and Her Majesty Queen Mathilde of Belgium.

As a composer, Luke has written numerous chamber works including a duo written specifically for the Weilerstein Duo. Lutosławski and Webern are his biggest influences, and he hopes to write music that carries this tradition forward into the 21st century.

Luke started his violin studies in Houston with Fredell Lack and Emanuel Borok, and debuted with the Houston Symphony at age 16. He studied with Cho-Liang Lin at Rice University’s Shepherd School of Music, Donald Weilerstein at the New England Conservatory, and Rodney Friend at the Royal Academy of Music in London. Other teachers and close mentors include Pierre Amoyal, Vivian Hornik-Weilerstein, Kim Kashkashian and Lucy Chapman. 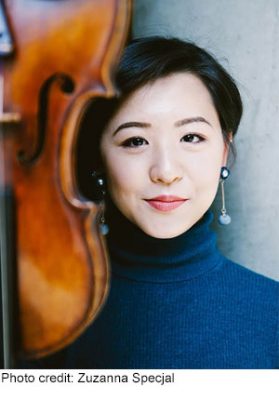 Delighting her listeners with “her warm, humane musicianship” and “sweet spot of grace”, Anna Lee is an active concert violinist, chamber musician, and teacher. She began violin studies at the age of four with Alexander Souptel and debuted as soloist performing the Paganini Violin Concerto No. 1 a year and a half later with the Singapore Symphony Orchestra under the baton of Lan Shui. She spent a large part of her childhood in Japan and Singapore even though she was born in South Korea, and at the age of six moved to New York after being accepted to the Juilliard School Pre-College Division under the tutelage of Masao Kawasaki.

Concert venues that Anna Lee has appeared in are the Carnegie-Weill, Carnegie-Zankel, Wigmore, Beethoven-Haus, Avery Fisher, Victoria, Lotte, and Esplanade Concert Halls, as well as Merkin Hall and Peter Jay Sharp Theater. She has claimed top prizes in the 2019 Montréal Competition, 2018 Indianapolis Competition, 2011 Sion-Valais Competition, 2011 Kronberg Violin Masterclasses, 2010 and 2012 Menuhin Competition (Junior and Senior Divisions, respectively), and Aspen Music Festival AACA Competition. Anna Lee has been the recipient of numerous awards, including the Louis Sudler Prize in the Arts, awarded by Office for the Arts at Harvard, the Bernhard and Mania Hahnloser Violin Prize at the Verbier Festival Academy, and the Jack Kent Cooke Young Artist Award.

She has also been featured in music festivals around the world such as the Gstaad Menuhin Festival and the Marlboro Music Festival, and on radio shows such as “From the Top” with host Christopher O’Riley and NPR Performance Today with host Fred Child. She has also been the cover page feature of the Wall Street Journal Magazine.

Notable chamber music collaborations include Gidon Kremer, Yuri Bashmet and Steven Isserlis in the Kronberg Academy’s “Chamber Music Connects the World” festival. Anna Lee was also presented by Sir András Schiff at the BeethovenFest in Bonn. As a soloist, Anna Lee made her New York Philharmonic debut in April 2011, as well as her Frankfurt debut in 2016 with maestro Christoph Eschenbach and the Hessische Rundfunk Radio Orchestra. She has also appeared with the Singapore, Indianapolis, Park Avenue Chamber, and Montreal Symphony Orchestras.

Anna Lee’s teachers were Masao Kawasaki and Cho-Liang Lin at the Juilliard School Pre-College Division, Ana Chumachenco at the Kronberg Academy, and Miriam Fried and Don Weilerstein in Boston, where she completed her Comparative Literature degree at Harvard College. She has also taught as a chamber music teacher, most notably at the Kronberg Academy’s Mit Musik—Miteinander festival and Festival MusicAlp in France. Most recently, Anna has begun work on a Master of Musical Arts degree at Yale University. 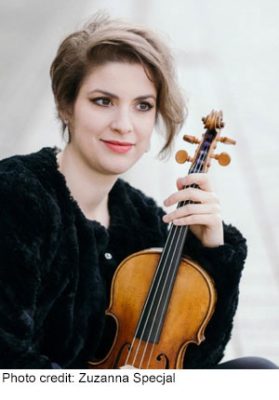 In October 2020, at the age of 27 she was appointed violin professor at the renowned University of Music and Performing Arts in Vienna.

In addition to her career as a soloist, the young violinist is also an avid chamber musician. She performed at renowned chamber music festivals and academies: the Verbier Academy, Hitzacker Festival and Academy and the Heidelberger Frühling Academy.

In 2015, together with pianist Andrei Banciu, she won the Second Prize and the Young Duo Award at the International Competition “Premio Trio di Trieste” in Trieste, Italy. 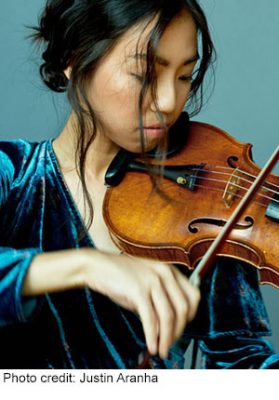 Violinist Shannon Lee has been praised for her “remarkable fire, impeccable intonation, and big, vibrant tone” (Gramophone). She is a recent prizewinner in several international competitions, including top prize and audience award at the Sendai Competition in Japan, 4th prize at the Queen Elisabeth Competition in Belgium, 2nd place at the Naumburg Competition in New York City, and Laureate at the Indianapolis Competition, where she was also recognized for Best Performance of an Ysaÿe Sonata. Her festival appearances as a soloist and chamber musician include Heifetz International Music Institute as Artist-in-Residence, Krzyżowa-Music, Music@Menlo, and Music From Angel Fire. In 2016-17 she was a founding member of Bicycle String Trio, performing at the Norfolk Chamber Music Festival and Avaloch Farm Music Institute. Shannon also received generous support from the Sylva Gelber Foundation in Canada through their Award for career development.

Born in Canada, Shannon began studying violin at age four in Plano, Texas. She made her solo debut at the age of twelve with the Dallas Symphony Orchestra, and two years later performed in Europe with Maestro Christof Perick and the Nuremberg Philharmonic. Other notable appearances include with the Tokyo Symphony, Antwerp Symphony, Belgian National Orchestra, and New York String Orchestra in Carnegie Hall. Her debut recording, Introducing Shannon Lee, features 19th and 20th century violin-piano works, which Gramophone Magazine praised for Shannon’s “technical command and fearless virtuosity.”

Shannon studies with Jaime Laredo and Jan Mark Sloman at the Cleveland Institute of Music, where she has been the recipient of the inaugural Mary Hamlin Memorial Presidential Scholarship as well as the Starling Foundation Scholarship. She received a diploma from the Curtis Institute of Music in Philadelphia as a student of Ida Kavafian and Arnold Steinhardt. In Philadelphia, she also served as a Curtis ArtistYear Fellow under the mentorship of Mary Javian, developing the music program at Cramp Elementary Pre-K and working with All City Orchestra chamber music programs for high school students. Previously she completed her Bachelor’s degree in computer science from Columbia University while taking violin lessons with David Nadien. In Texas, Shannon studied with Jan Sloman, and has played privately or in master classes for Guillaume Pirard, Boris Kushnir, and Rainer Schmidt.