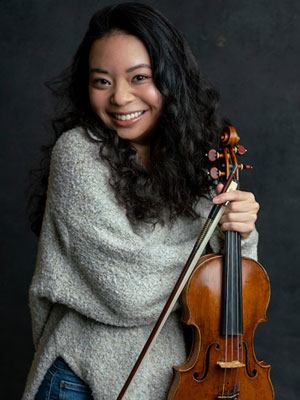 Praised by The Baltimore Sun for her “impeccable technique…deeply expressive phrasing…and poetic weight,” Sirena Huang is one of her generation’s most celebrated violinists. She brings not only technical brilliance and powerful artistry to the stage, but also a profound sense of connection to her audience.

Sirena made her solo debut with the National Taiwan Symphony Orchestra in 2004 at the age of nine and has performed in twenty countries across three continents. She has been featured as a soloist with more than fifty prestigious ensembles, including the New York Philharmonic, Cleveland Orchestra, Indianapolis, Baltimore, Shanghai, Russian, and Singapore symphony orchestras, and the Staatskapelle Weimar in Germany. She has performed in leading venues including Berliner Philharmonie, Carnegie Hall, Lincoln Center, The Kennedy Center, the Kravis Center, Esplanade-Theatres on the Bay, Shanghai Concert Hall, and the Taiwan National Concert Hall, among many others. She has appeared as a guest artist at the Verbier Music Festival, Marlboro Music Festival, Ravinia Music Festival, Aspen Music Festival, Newport Music Festival, Music in the Mountains Festival, Eastern Music Festival, Sarasota Arts Series, “The Great Music for a Great City” series in New York City, and many others.

Motivated by a deep wish to inspire peace and harmony with her music, Sirena has performed before world leaders, thinkers and humanitarians. She has appeared at the World Peace Conference held in Petra and at the Opening Ceremony of the “Forum 2000 World Conference” in Prague.

In addition to her TED Talk in 2006, Sirena has been featured on numerous radio and television broadcasts, including WQXR’s McGraw-Hill Young Artists Showcase, and NPR’s From the Top as well as interviews with WNPR, CNBC, WTNH, WTIC, WB20 and Beethoven Radio. 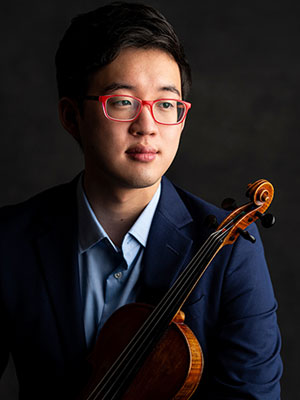 Julian Rhee is quickly gaining recognition as an emerging artist and performer, praised for his “sophisticated, assured tone, superb intonation, and the kind of poise and showmanship that thrills audiences.” (The Strad )

An avid soloist, Julian made his Milwaukee Symphony Orchestra debut at age 8, and has gone on to perform with orchestras such as the Santa Rosa, Eugene, Pittsburgh, Madison, Avanti, West Suburban, Lacrosse and San Diego symphonies, the Aspen and Wisconsin philharmonics, and the San Jose and Wisconsin chamber orchestras, among others. He has performed in an array of venues including Ravinia’s Bennett Gordon Hall, Heinz Hall, the Overture Center for the Arts, Teatro El Círculo in Rosario, Argentina, the Musikverein in Vienna, Bartók Hall in Hungary, New World Center, and the John F. Kennedy Center as a Presidential Scholar, receiving his medal at the White House. Recent and upcoming engagements include appearances at the Dame Myra Hess Memorial Concerts, with the East Coast Chamber Orchestra, Leonard Slatkin and the Indianapolis Symphony, Nicholas McGegan and the Eugene Symphony, and the Middleton, Bucks County, Brevard, Menomonee Falls, and Fresno philharmonic orchestras.

Julian is the Silver Medalist of the 11th Quadrennial International Violin Competition of Indianapolis, winner of Astral Artists’ National Auditions, and the First Prize winner of the 2020 Elmar Oliveira International Competition, where he was also awarded the special Community Award.

A passionate chamber musician, Julian’s performance on violin and viola earned him First Prize in the Fischoff and the M-Prize Chamber Competitions. He has attended and performed at the Heifetz, Four Seasons, Ravinia Steans Institute, Rockport Music and Northshore Chamber music festivals. He has also appeared alongside Time for Three, Jupiter Chamber Players, 98.7 WFMT’s Introductions, Milwaukee Public Television, and Wisconsin Public Radio and Television.

Julian studied with Hye-Sun Lee and Almita Vamos at the Music Institute of Chicago Academy. He is currently pursuing a master’s degree with Miriam Fried at the New England Conservatory. 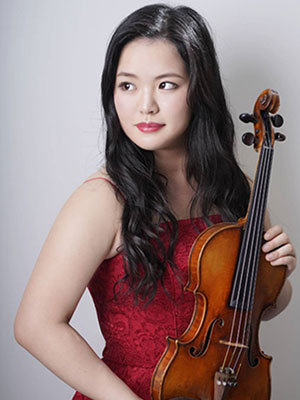 Minami Yoshida gave her Osaka Philharmonic Orchestra debut at age 12, and performed with orchestras including the Helsinki, Tokyo and Kansai philharmonic orchestras, the Finnish Radio, Indianapolis, Tokyo, City of Kyoto and the Tokyo Metropolitan symphony orchestras, the Orchestre symphonique de Montréal, and the NDR Radiophilharmonie, among others.

She has appeared at several festivals including the Ravinia Steans Institute and the Taipei Music Festival and Academy. She has received scholarships from the Tan Family Education Foundation, the ROHM Music Foundation, and the Ezoe Memorial Recruit Foundation.

Born in the traditional ancient city of Nara, Japan, Ms. Yoshida began violin at age five. After graduating from Toho Gakuen Music High School, she received her Artist Diploma from the Toho Gakuen College of Music as an honor student. She received her Bachelor of Music degree as the recipient of the Dean’s Scholarship at the New England Conservatory, and is currently studying in the Toyko College of Music’s Artist Diploma Program as an Honorary Scholarship Student. She studies with Miriam Fried, Koichiro Harada and Kyoko Takezawa. 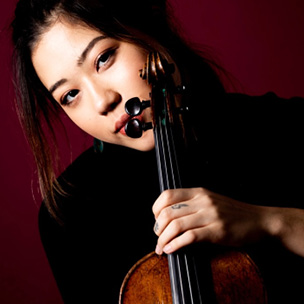 American violinist Claire Wells grew up in a musical family, playing both violin and piano from the age of three. Now studying at the Kronberg Academy with Mihaela Martin, Claire Wells has gained international attention as a soloist. Wells was the Mendelssohn-Prize First Prize winner and Commission Prize winner at the Felix Mendelssohn Bartholdy Competition 2021, and has taken major prizes at the 11th Quadrennial International Violin Competition of Indianapolis, the Mirecourt International Competition, and the Lynn Harrell Competition, among many others.

Claire Wells plays on a Giovanni Battista Guadagnini, on loan from a generous donor. 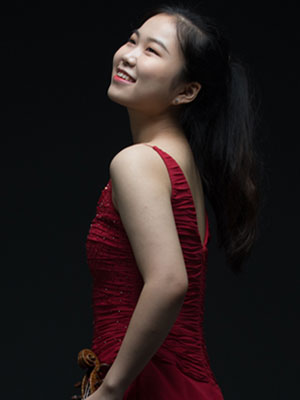 SooBeen Lee has been praised by The Washington Post for her “poised presence, a luxurious sound, spot-on intonation, and a bow arm that surely will be the envy of her peers.” She has appeared as soloist with every major Korean orchestra, including the Seoul and Busan philharmonics and KBS (Korean Broadcasting System) Symphony Orchestra. Other distinctions include performances for former Secretary-General of the United Nations, Ban Ki-moon, at the Blue House for the King and Queen of Malaysia, with China’s Wuhan Philharmonic at the Seoul Arts Center, and for many state guests in Korea.

As First Prize winner of the 2014 Young Concert Artists International Auditions, SooBeen was also honored with the Slomovic Soloist Prize for support of her Washington, D.C. recital debut at The Kennedy Center, the Michaels Award, which provided support for her New York recital debut, and three performance prizes including the Korean Concert Society Prize. SooBeen made her New York concerto debut performing the Chausson Poème with the Orchestra of St. Luke’s at Alice Tully Hall.

Additional performances have included the Tchaikovsky Concerto with the Gulf Coast and Rockford symphonies, the Mendelssohn Concerto with the Plymouth Philharmonic, the Sibelius Concerto with the Longwood Symphony, the Brahms Concerto with the Palm Beach Symphony, and recitals for Boston’s Isabella Stewart Gardner Museum, Southern Adventist University, Buffalo Chamber Music Society, Abbey Church Events and the Cosmos Club in Washington, D.C. This season, SooBeen performs as soloist with the Charleston Symphony Orchestra, and in recital at the Artist Series Concerts of Sarasota, Colgate University, and the Harriman-Jewell
Series.

In the coming season SooBeen will make concerto appearances with the Aiken Symphony and the Oregon Symphony. She will present recital and chamber music performances by the Tri-County Concerts Association (Wayne, PA), FPC Concerts (Myrtle Beach, SC), and the Morgan Library and Museum. As part of Young Concert Artists’ special season finale performance at Zankel Hall at Carnegie Hall in May 2023, SooBeen will perform alongside fellow YCA roster artists and distinguished alumni including pianist Anne-Marie McDermott, violinist Chee-Yun, and harpsichordist Anthony Newman.

SooBeen currently studies with Miriam Fried at the New England Conservatory, where she performed the Sibelius Violin Concerto as winner of their Concerto Competition. 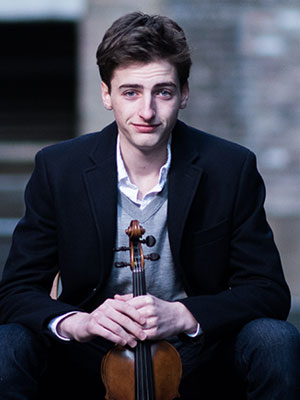 Joshua Brown was first recognized for his debut performance with the Cleveland Orchestra at the age of 15, for which he received glowing reviews from critics including “stunning,” “brilliantly played” and “spellbinding.” Following that debut, Joshua has gone on to perform with dozens of orchestras both in the United States and abroad, continually garnering praise from critics, has performed in concert halls around the world, has been featured on NPR’s From the Top, WFMT, WNIU, WCLV, ElmhurstTV, Fox5DC, Brazil’s Record TV, and Argentina’s Radio Nacional Clásica FM 96.7.

A recipient of the Stradivari Society of Chicago, Joshua is extremely grateful to be playing on a 1679 Pietro Guarneri violin from Cremona. As a full-scholarship recipient, Joshua earned his Bachelor of Music and is currently pursuing his Master of Music with Donald Weilerstein at the New England Conservatory of Music (NEC).

Joshua is passionate about reaching and connecting with new listeners and towards that end, maintains a very active presence on his Instagram account @joshuabrownviolinist.