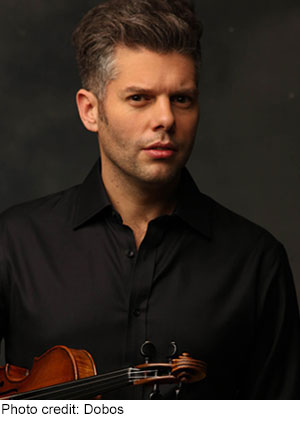 In 2010 he founded the Kelemen Quartet, which received a silver medal, audience prize and the Musica Viva Grand Prize at the Melbourne International Chamber Music Competition in 2011. In 2014 the Kelemen Quartet was awarded with the first prize at the Premio Paolo Borciani in Reggio Emilia.

Since 2005 he has been a professor at the Franz Liszt Music Academy Budapest and since 2014 a professor at the Hochschule für Musik und Tanz in Cologne. He has also been a guest artist at Indiana University Bloomington. He performs on a Guarneri del Gesú violin of 1742 (ex-Dénes Kovács), generously loaned by the State of Hungary. 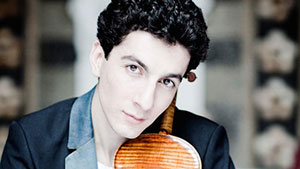 The Brahms CD was released in June 2013 on Naïve Classique. Sergey’s discography on the label also includes the Sibelius and Khachaturian concerti with Sinfonia Varsovia and Emmanuel Krivine, both Shostakovich concerti with the Orchestre National de France and Kurt Masur, a recording of the Shostakovich and Franck sonatas for violin and piano and the complete Sonatas and Partitas for solo violin by J.S. Bach.

In 2015, Sergey and Lusine released the album ‘My Armenia’, a disc of Armenian music from Komitas to Mirzoyan, dedicated to the 100th Commemoration of the Armenian Genocide. 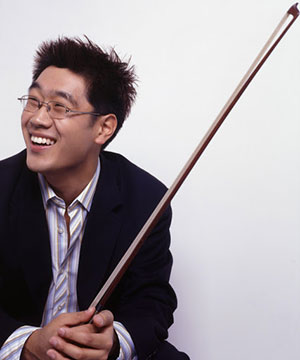 Korean-American violinist Soovin Kim is an exciting player who has built on the early successes of his prize-winning years to emerge as a mature and communicative artist. After winning first prize at the Niccolò Paganini International Competition, Mr. Kim was recipient of the prestigious Borletti-Buitoni Trust Award, an Avery Fisher Career Grant, and the Henryk Szeryng Foundation Career Award. Today he enjoys a broad musical career, regularly performing repertoire such as Bach sonatas and Paganini caprices for solo violin, sonatas for violin and piano by Beethoven, Brahms, and Ives, string quartets, Mozart and Haydn concertos and symphonies as a conductor, and new world-premiere works almost every season.

In recent seasons he has been acclaimed for his “superb…impassioned” (Berkshire Review) performance of Alban Berg’s Chamber Concerto at the Bard Festival with the American Symphony Orchestra and a “sassy, throaty” (Philadelphia Inquirer) rendition of Kurt Weill’s concerto with the Curtis Chamber Orchestra. Other unusual concerto collaborations included Mendelssohn’s Double Concerto with conductor Maestro Myung-Whun Chung, the same Mendelssohn concerto with the Dallas Symphony and music director Jaap van Zweden, and Beethoven’s Triple Concerto in Carnegie Hall. He has performed in past seasons with the Philadelphia Orchestra, San Francisco Symphony, Stuttgart Radio Symphony, Salzburg Mozarteum Orchestra, and the Seoul Philharmonic and Accademia di Santa Cecilia Orchestra with Maestro Chung.

For 20 years Soovin Kim was the 1st violinist of the Johannes String Quartet. Among their special projects was a two-season tour with the famed and now-retired Guarneri String Quartet in an unusual program including world-premieres of works by Esa-Pekka Salonen, Derek Bermel, and William Bolcom. Mr. Kim maintains a close relationship with the famed Marlboro Festival where he regularly spends his summers. He is well-known in Korea as a member of MIK, his ground-breaking piano quartet ensemble. He recently launched the exciting Chien-Kim-Watkins Trio with his wife, pianist Gloria Chien, and cellist Paul Watkins of the Emerson Quartet.

Soovin Kim’s latest solo CD, Gypsy, was his third solo collaboration between American label Azica Records and Korea-based Stomp/EMI. They previously released a French album of Fauré and Chausson with pianist Jeremy Denk and the Jupiter Quartet, and Paganini’s demanding 24 Caprices for solo violin which was named Classic FM magazine’s Instrumental Disc of the Month (“he emerges thrillingly triumphant…a thrilling debut disc.”). He made his first solo recording with Jeremy Denk for Koch-Discover in duo works by Schubert, Bartók, and Strauss. Mr. Kim also has six commercial chamber music recordings including an acclaimed live performance from the Marlboro Festival of Beethoven’s Archduke trio with pianist Mitsuko Uchida and the late cellist David Soyer. In 2019 his recording of Bach’s monumental solo sonatas and partitas will be released.

Soovin Kim founded the Lake Champlain Chamber Music Festival in Burlington, Vermont in 2009. With its focused programming and exceptional artists the festival is “increasing its stature as one of this country’s summer chamber music meccas (Rutland Herald).” Mr. Kim and the Lake Champlain festival helped to create the ONE Strings program in Burlington which makes violin lessons part of the regular curriculum for every 3rd, 4th, and 5th grader. In May 2015 he received an honorary doctorate degree from the University of Vermont in recognition of his contributions to the community.

Soovin Kim dedicates much of his time to his passion for teaching. He has been on the faculties of Stony Brook University and the Peabody Institute, and now he teaches exclusively at the New England Conservatory in Boston. Mr. Kim studied at the Cleveland Institute of Music with David Cerone and Donald Weilerstein, and at the Curtis Institute of Music with Victor Danchenko and Jaime Laredo..

In 2020, he and his wife, pianist Gloria Chien, became co-artistic directors of Chamber Music Northwest in Portland, Oregon. 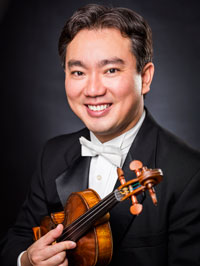 The First Prize Winner of the 2003 Walter W. Naumburg Foundation’s Violin Competition and the 2000 Hannover International Violin Competition, Frank Huang has established a major career as a violin virtuoso. Since performing with the Houston Symphony in a nationally broadcast concert at the age of 11, he has appeared with orchestras throughout the world including The Cleveland Orchestra, Los Angeles Philharmonic, Saint Paul Chamber Orchestra, Indianapolis Symphony, NDR Radio Philharmonic Orchestra of Hannover, Amadeus Chamber Orchestra, and the Genoa Orchestra. He has also performed on NPR’s Performance Today, ABC’s Good Morning America, and CNN’s American Morning with Paula Zahn. He has performed at Wigmore Hall (in London), Salle Cortot (Paris), Kennedy Center (Washington, D.C.), and the Herbst Theatre (San Francisco), as well as a second recital in Alice Tully Hall (New York), which featured the World Premiere of Donald Martino’s Sonata for Solo Violin. Mr. Huang’s first commercial recording — featuring fantasies by Schubert, Ernst, Schoenberg, and Waxman — was released on Naxos in 2003. He made his New York Philharmonic solo debut in June 2016 leading and performing Vivaldi’s The Four Seasons and Piazzolla’s Four Seasons of Buenos Aires. In 2017–18 he led the Orchestra from his Concertmaster chair in works by Mozart and Tchaikovsky, and performed with the Philharmonic as soloist in Lalo’s Symphonie espagnole at Bravo! Vail.

In addition to his solo career, Mr. Huang is deeply committed to chamber music. He is a member of the New York Philharmonic String Quartet, established in the 2016–17 season, and has performed at the Marlboro Music Festival, Ravinia’s Steans Institute, Seattle Chamber Music Festival, and Caramoor. He frequently participates in Musicians from Marlboro’s tours, and was selected by The Chamber Music Society of Lincoln Center to be a member of the prestigious CMS Two program. Before joining the Houston Symphony as concertmaster in 2010, Frank Huang held the position of first violinist of the Grammy Award–winning Ying Quartet and was a faculty member at the Eastman School of Music.

Frank Huang was born in Beijing, China. At the age of seven he moved to Houston, Texas, where he began violin lessons with his mother. He commenced study with Fredell Lack at the University of Houston and at 16 he enrolled in the pre-college program at the Cleveland Institute of Music (CIM) where he studied with Donald Weilerstein. He continued studies with Weilerstein in college and earned his bachelor of music degree from CIM in 2002. He subsequently attended The Juilliard School in New York City, studying violin with Robert Mann. He is an alum of the Music Academy of the West. He served on the faculties of The Shepherd School of Music at Rice University and the University of Houston, and currently serves on the faculty of The Juilliard School. 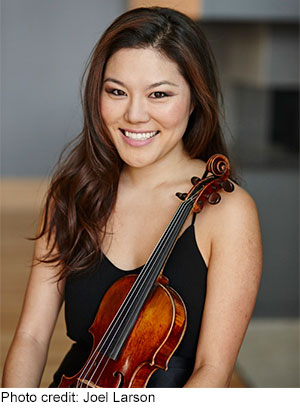 Australian-born Susie Park, the Minnesota Orchestra’s first associate concertmaster, had already toured with the Orchestra before beginning her appointment in September 2015, performing concerts and participating in educational programs when the ensemble traveled to Cuba the previous May.

Park has received numerous awards. She won top honors at the International Violin Competition of Indianapolis, the Wieniawski Competition in Poland and the Yehudi Menuhin International Competition in France, which led to many performances and reengagements throughout the U.S. and Europe. She also won the Richard Goldner Concerto Competition, Ernest Llewellyn String Award and various additional awards.

Park is passionate about chamber music. She is a founding member of ECCO, the East Coast Chamber Orchestra, a conductorless ensemble comprising a diverse selection of talented chamber musicians, soloists and principal string players from American orchestras; their self-titled debut album of 2012, released on the eOne label, includes works from three centuries, by Geminiani, Tchaikovsky and Shostakovich.

In addition, Park was the violinist of the Eroica Trio from 2006 to 2012, with which she recorded the ensemble’s eighth CD, an all-American disc nominated for a Grammy, and toured internationally. She was also a member of the Chamber Music Society of Lincoln Center Two, collaborating with Wu Han, Gary Hoffman and Ida Kavafian. For three consecutive summers she was in residence at the Marlboro Music Festival, and she has participated in numerous tours with Musicians from Marlboro. Additional musicians with whom she has performed chamber music include members of the Guarneri, Juilliard, Emerson and Cleveland Quartets, and Kim Kashkashian, Pamela Frank, Jason Vieaux, Cho-Liang Lin and Jaime Laredo. Among her festival engagements have been performances at Music from Angel Fire, the Caramoor, Skaneateles, Aspen, Ravinia and Bowdoin festivals in the U.S.; Open Chamber Music at Prussia Cove in England; Bermuda Festival; the Mozarteum Sommerakademie in Austria; and Keshet Eilon in Israel.

Park’s interest in music of all genres has also led to collaborations with artists such as jazz trumpeter Chris Botti, with whom she performed 41 consecutive shows at the Blue Note Jazz Club in New York.

A native of Sydney, Park picked up a violin at the age of three, made her solo debut at five and completed preparatory studies at the Sydney Conservatorium of Music. She went on to earn a bachelor of music degree at the Curtis Institute and an artist diploma at the New England Conservatory; her teachers have included Jaime Laredo, Ida Kavafian, Donald Weilerstein, Miriam Fried, Shi-Xiang (Peter) Zhang and Christopher Kimber. In her spare time she enjoys a variety of creative arts, including knitting and clothing design.

Alina Pogostkina displays impressive versatility in diverse and wide-ranging repertoire from baroque and classical, often played on gut strings, to modern masterworks. In 2018, following her desire to further explore the spiritual aspect of music, she created ‘Mindful Music Making’, a specially curated program which aims to bring mindfulness and deeper exploration of individual creativity relevant to the 21st Century classical musician.

St. Petersburg-born Alina Pogostkina grew up in Germany and received violin lessons from her father Alexander Pogostkin. She later studied with Antje Weithaas at Berlin’s Hochschule für Musik ‘Hanns Eisler’, and baroque violin with Reinhard Goebel. She plays on a Camillo Camilli violin from 1752.