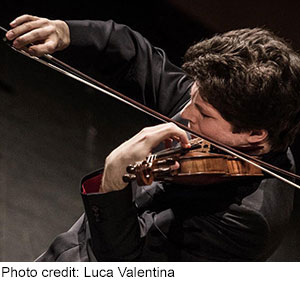 Augustin Hadelich is one of the great violinists of our time. From Adès to Paganini, from Brahms to Bartók, he has mastered a wide-ranging and adventurous repertoire and is often referred to by colleagues as a “musician’s musician.” Named Musical America’s 2018 “Instrumentalist of the Year,” he is consistently cited around the world for his phenomenal technique, soulful approach, and insightful interpretations.

Recently signed to Warner Classics, his first release on the label – Paganini’s 24 Caprices – was released in January 2018. One of Germany’s most prestigious newspapers, Süddeutsche Zeitung, wrote about this recording: “Anyone who masters these pieces so confidently has, so to speak, reached the regions of eternal snow: he has reached the top.” His second recording for Warner Classics, the Brahms and Ligeti concertos with the Norwegian Radio Orchestra under Miguel Harth-Bedoya, followed in April 2019. Other recent discs include live recordings of the violin concertos of Tchaikovsky and Lalo (Symphonie espagnole) with the London Philharmonic Orchestra on the LPO label (2017), and a series of releases on the AVIE label including an album of violin concertos by Jean Sibelius and Thomas Adès (Concentric Paths), with Hannu Lintu conducting the Royal Liverpool Philharmonic Orchestra (2014), which was nominated for a Gramophone Award and listed by NPR as one of their Top 10 Classical CDs of that year.

Born in Italy, the son of German parents, Augustin Hadelich is now an American citizen. He holds an Artist Diploma from The Juilliard School, where he was a student of Joel Smirnoff. After winning the Gold Medal at the 2006 International Violin Competition of Indianapolis, concerto and recital appearances on many of the world’s top stages quickly followed, including Carnegie Hall, Lincoln Center, Chicago’s Symphony Hall, the Kennedy Center, Wigmore Hall/London, and the Concertgebouw in Amsterdam. Other distinctions include an Avery Fisher Career Grant (2009); a Borletti-Buitoni Trust Fellowship in the UK (2011); the inaugural Warner Music Prize (2015); a Grammy Award (2016); as well as an honorary doctorate from the University of Exeter in the UK (2017).

Augustin Hadelich plays the violin “Leduc, ex-Szeryng” by Giuseppe Guarneri del Gesù of 1744, generously loaned by a patron through the Tarisio Trust. 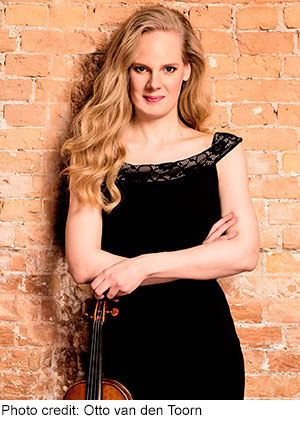 Hailed for her “brilliant… polished, expressive and intense” (Cleveland Plain Dealer) and “absolutely stunning” (Chicago Tribune) playing, Dutch violinist Simone Lamsma is respected by critics, peers and audiences as one of classical music’s most striking and captivating musical personalities. Conductor Jaap van Zweden, with whom Simone enjoys a regular collaboration, describes her as one of the leading violinists in the world.
With an extensive repertoire of over 60 violin concertos, Simone’s recent seasons have seen her perform with many of the world’s leading orchestras.

In 2017, Simone’s most recent recording featuring Shostakovich’s first violin concerto and Gubaidulina’s In Tempus praesens with the Netherlands Radio Philharmonic under James Gaffigan and Reinbert de Leeuw was released on Challenge Classics and received high accolades from the press, as did her previous Mendelssohn, Janáček and Schumann CD with pianist Robert Kulek.

In addition to her many international prizes and distinctions, Simone was awarded the national Dutch VSCD Classical Music Prize in the category ‘New Generation Musicians’ in 2010, awarded by the Association of Dutch Theatres and Concert Halls to artists that have made remarkable and valuable contributions to the Dutch classical music scene.

In May 2018, Simone was invited by His Majesty King Willem-Alexander and Her Majesty Queen Máxima of The Netherlands to perform during their official state visit to Luxembourg.

Simone began studying the violin at the age of five and moved to the UK aged 11 to study at the Yehudi Menuhin School with Professor Hu Kun. At the age of 14, Simone made her professional solo debut with the North Netherlands Orchestra performing Paganini’s 1st Violin Concerto, her debut highly praised by the press. She continued her studies at the Royal Academy of Music in London with Professor Hu Kun and Professor Maurice Hasson, where she graduated aged 19 with first class honors and several prestigious awards. In 2019, she was made Fellow of the Royal Academy of Music in London, an honor limited to 300 former Academy students, and awarded to those musicians who have distinguished themselves within the profession.

Simone currently lives in The Netherlands.

Simone plays the “Mlynarski” Stradivarius (1718), on generous loan to her by an anonymous benefactor. 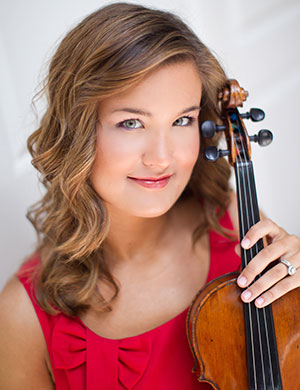 Celeste Golden Boyer began her musical studies at three years of age. When she was nine years old, she became a student of Arkady Fomin, violinist in the Dallas Symphony, and at fifteen, Celeste was accepted into the Curtis Institute of Music, studying with Jaime Laredo and Ida Kavafian. She completed her Bachelor of Music degree at Curtis in 2005, and in 2007, she received a Master of Music degree from the Cleveland Institute of Music where she studied with David Cerone and Paul Kantor.

Celeste is a laureate of several national and international competitions. Most notably, she was the Bronze Medalist at the International Violin Competition of Indianapolis in 2006. Celeste has appeared as soloist with numerous symphony orchestras around the world, including the St. Louis Symphony, the Latvian Chamber Orchestra in Riga, Latvia, the Dallas Symphony Orchestra, and the Indianapolis Symphony Orchestra. As a chamber musician, she has appeared in series and festivals such as the Jupiter Symphony Chamber Players, the Festival de San Miguel de Allende, the Chamber Music Festival of Lexington, the Innsbrook Institute Music Festival, the Aspen Music Festival and School, and the Marlboro Music Festival. Celeste won a three-year fellowship to the Aspen Music Festival and School in 2004, and was subsequently awarded the Dorothy DeLay Memorial Fellowship by the festival, an award given to only one violin student each summer.

Celeste was the concertmaster of the New York String Orchestra Seminar in 2005 with concerts at Carnegie Hall. She also performed as concertmaster for the Orchestra of St. Luke’s in the New York City premiere of John Adams’ opera, “A Flowering Tree” at Lincoln Center in 2009. Celeste was a member of the Fort Worth Symphony Orchestra from 2010-2011, and currently performs frequently with the IRIS Orchestra in Germantown, Tennessee.

Ms. Boyer became Second Associate Concertmaster of the St. Louis Symphony at the beginning of the 2011/2012 Season. She resides in St. Louis, MO with her husband and their daughter, Charlotte. 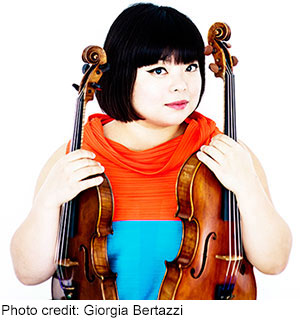 Violinist/violist Yura Lee is one of the most versatile and compelling artists of today. She is one of the very few in the world who holds mastery of both violin and viola, and she actively performs both instruments equally. Her career spans through various musical mediums: both as a soloist and as a chamber musician, captivating audiences with music from baroque to modern, and enjoying a career that spans more than two decades that takes her all over the world.

At age 12, Yura Lee became the youngest artist ever to receive the Debut Artist of the Year prize at the “Performance Today” awards given by National Public Radio. She is also the recipient of the prestigious Avery Fisher Career Grant given by Lincoln Center in New York City. Yura Lee’s CD with Reinhard Goebel and the Bayerische Kammerphilharmonie, titled Mozart in Paris (Oehms Classics) received the prestigious Diapason d’Or Award in France.

For violin, Yura Lee plays a fine Giovanni Grancino violin kindly loaned to her through the Beares International Violin Society by her generous sponsors. For viola, she plays an instrument made in 2002 by Douglas Cox, who resides in Vermont.

Devoted to chamber music, Ye-Eun performs at festivals around the world including Dresdener Music Festival, Schleswig-Holstein, Mecklenburg-Vorpommern, Rheingau Musikfestival in Germany, Bulgos Festival in Spain, and Verbier Festival in Switzerland. She’s regularly invited to the “La Folle journée” in Japan and France, where she has performed with the Ural Philharmonic Orchestra and Dmitri Liss, the Prazak Quartet and Plamena Mangova as well as been invited by Gidon Kremer to the Lockenhaus and Kronberg festivals, where she performed with Gidon Kremer, Yuri Bashmet, Lynn Harell and Khatia Buniatishvili. In 2011, Ye-Eun gave a very successful concert tour with Anne Sophie Mutter of chamber music in Hannover, Essen, Cologne, Hamburg, Frankfurt, Friedrichshafen (Germany), Vienna (Austria), Lucerne, Wehr, Verbier (Switzerland). She also performed a virtuosi concert tour with Anne-Sophie Mutter in Taipei, China, and South Korea in 2013.

Ye-Eun Choi was born in 1988, in Seoul, South Korea and studied with Ana Chumachenco at the Musik hochschule in Munich. Her exceptional talent and musical maturity were quickly recognized, both as a recipient of the Anne-Sophie Mutter Foundation scholarship and as one of the ‘Emerging Artists of the Year’ by the American Symphony Orchestra League. In 2013, Ye-Eun Choi received the European Culture Award for New Artists and gave a performance with MDR Symphony Orchestra under Kristjan Jaervi at this award ceremony.

Ye-Eun plays a violin by Pietro Giacomo Rogeri (1710), generously lent to her by the Anne-Sophie Mutter Foundation. 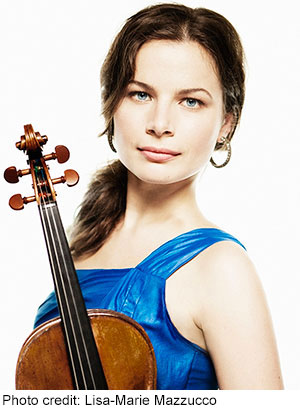 Acclaimed for her passionate, powerful performances, beautiful sound, and compelling command of her instrument, violinist Bella Hristova is a young musician with a growing international career.  The Strad has praised, “Every sound she draws is superb” and The Washington Post wrote she is “a player of impressive power and control”.

Her appearances with orchestras in recent seasons include the New York String Orchestra  at Carnegie Hall, the Orchestra of St. Luke’s with Pinchas Zukerman at Lincoln Center, the Buffalo Philharmonic Orchestra, Chautauqua, Columbus, Hawaii, Kansas City, Milwaukee and Winnipeg symphonies as well as orchestras in Asia, Europe, Latin America and New Zealand. In recital, Ms. Hristova has performed at some of the premier venues in the world, including Carnegie Hall, Merkin Concert Hall, the Isabella Gardner Museum in Boston, and Kennedy Center. In 2017 she toured New Zealand, performing and recording Beethoven’s 10 Sonatas with renowned pianist Michael Houstoun. A sought-after chamber musician, Ms. Hristova performs frequently with The Chamber Music Society of Lincoln Center and is an alum of The Bowers Program.

Ms. Hristova’s recording Bella Unaccompanied (A.W. Tonegold Records) features works for solo violin by John Corigliano, Kevin Puts, Piazzolla, Milstein, and J. S. Bach, and her Naxos release of de Bériot solo works received impressive critical recognition. A passionate proponent of new music and composers, Ms. Hristova commissioned iconic American composer Joan Tower, to write “Second String Force” for Unaccompanied Violin, which she premiered and performed throughout the US. Her husband, acclaimed composer David Serkin Ludwig was commissioned by a consortium of eight major orchestras across the United States to write a violin concerto for her, which she continues to actively perform.

Born in Pleven, Bulgaria to Russian and Bulgarian parents, Ms. Hristova began violin studies at the age of six. At twelve, she participated in master classes with Ruggiero Ricci at the Mozarteum in Salzburg. In 2003, she entered the famed Curtis Institute of Music in Philadelphia, where she studied with Ida Kavafian. She received her Artist Diploma with Jaime Laredo at Indiana University in 2010.

Ms. Hristova lives in Philadelphia with her husband and their four cats. She performs on a 1655 Nicolò Amati violin.