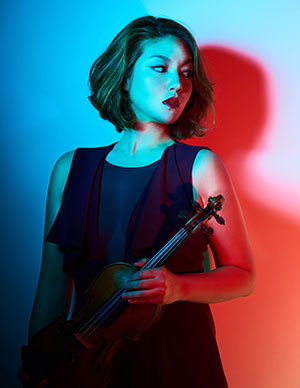 Violinist Jinjoo Cho is redefining what it means to be a classical artist in the 21st Century as a charismatic soloist, dynamic and engaging chamber musician, dedicated teacher, innovative artistic director, and published writer.

Passionate about pedagogy, Jinjoo has taught at some of the most reputable conservatories in the United States such as the Cleveland Institute of Music and Oberlin College and Conservatory. Since 2018, Jinjoo has held the position of Assistant Professor of Violin at the Schulich School of Music at McGill University in Montreal and serves as the Founding Artistic Director of the ENCORE Chamber Music Institute, a summer festival that offers young musicians an experience of true immersion as chamber musicians. Jinjoo’s dedication to nurturing the next generation of young musicians stems directly from the influence of her mentors Paul Kantor and Jaime Laredo.

Jinjoo is a consummate recording artist. Her latest album, La Capricieuse (SONY Classical) garnered critical and commercial success in her home country of Korea. Her previous recordings include The Indianapolis Commissions (Azica Label) and Jinjoo Cho (Analekta Label). In 2021, a new Saint-Saëns album is to be released by Naïve Classical with Ensemble Appassionato, conducted by her dear friend Mathieu Herzog. In the upcoming 21-22 Season, Jinjoo’s scheduled performances include a subscription concert with the Charlotte Symphony, a solo debut in Paris at La Seine Musicale, and a recital as a featured artist at The Gilmore Festival. Jinjoo published her first book, Would I Shine Someday, in 2021. 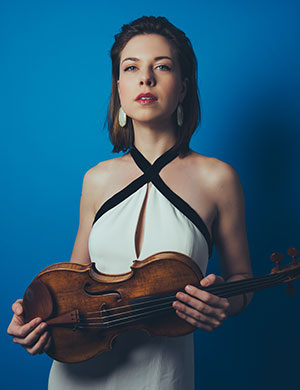 Violinist Tessa Lark is one of the most captivating artistic voices of our time, consistently praised by critics and audiences for her astounding range of sounds, technical agility, and musical elegance. In 2020 she was nominated for a GRAMMY in the Best Classical Instrumental Solo category and received one of Lincoln Center’s prestigious Emerging Artist Awards: the special Hunt Family Award. Other recent honors include a 2018 Borletti-Buitoni Trust Fellowship and a 2016 Avery Fisher Career Grant, Silver Medalist in the 9th Quadrennial International Violin Competition of Indianapolis, and winner of the 2012 Naumburg International Violin Competition. A budding superstar in the classical realm, she is also a highly acclaimed fiddler in the tradition of her native Kentucky, delighting audiences with programming that includes Appalachian and bluegrass music and inspiring composers to write for her.

Ms. Lark has been a featured soloist at numerous U.S. orchestras, recital venues, and festivals since making her concerto debut with the Cincinnati Symphony Orchestra at age sixteen. She performed at Carnegie Hall’s Weill Recital Hall in 2017 on Carnegie’s Distinctive Debuts series, and again the following year as part of APAP’s Young Performers Career Advancement showcase. Ms. Lark has appeared with the Louisville Orchestra and the Buffalo Philharmonic; the Albany, Indianapolis, Knoxville and Seattle symphonies, and at such venues as New York’s Lincoln Center, Amsterdam’s Concertgebouw, the Music Center at Strathmore, the Isabella Stewart Gardner Museum in Boston, San Francisco Performances, Ravinia, the Seattle Chamber Music Society, Australia’s Musica Viva Festival, and the Marlboro, Mostly Mozart, Bridgehampton, and Music@Menlo festivals.

Three recordings featuring Ms. Lark were released in 2019: Fantasy, an album on the First Hand Records label that includes fantasias by Schubert, Telemann and Fritz Kreisler, Ravel’s Tzigane, and Ms. Lark’s own Appalachian Fantasy; SKY, a GRAMMY-nominated Albany Symphony Orchestra release whose title selection is a bluegrass-inspired violin concerto written for her by Michael Torke that she premiered with the ASO in January 2019; and Invention, a debut album of the violin-bass duo Tessa Lark & Michael Thurber that comprises arrangements of Two-Part Inventions by J.S. Bach along with non-classical original compositions by Ms. Lark, Mr. Thurber, and Eddie Barbash.

A fourth recording, The Stradgrass Sessions, will be released in early 2021. It includes collaborations with composer-performers Jon Batiste, Edgar Meyer, Michael Cleveland, and Sierra Hull; works by Bartók and Ysaÿe; and the premier recording of John Corigliano’s solo violin composition STOMP.

Keeping in touch with her Kentucky roots, Ms. Lark performs bluegrass and Appalachian music regularly and collaborated with Mark O’Connor on his album MOC4. She also plays jazz violin, most recently performing with the Juilliard Jazz Ensemble at Dizzy’s Club Coca Cola in New York City. She premiered her own Appalachian Fantasy as part of her Distinctive Debuts recital at Carnegie Hall, where she also gave the world premiere of Michael Torke’s Spoon Bread, written specifically for her stylistic capabilities.

Ms. Lark is an alumna of NPR’s From the Top, the premier radio showcase for the nation’s most talented young musicians, and is serving as Co-Host/Creative for the show’s 2020-21 season.

Her primary mentors include Cathy McGlasson, Kurt Sassmannshaus, Miriam Fried, and Lucy Chapman. She is a graduate of New England Conservatory and completed her Artist Diploma at The Juilliard School, where she studied with Sylvia Rosenberg, Ida Kavafian, and Daniel Phillips. Ms. Lark plays a ca. 1600 G.P. Maggini violin on loan from an anonymous donor through the Stradivari Society of Chicago. 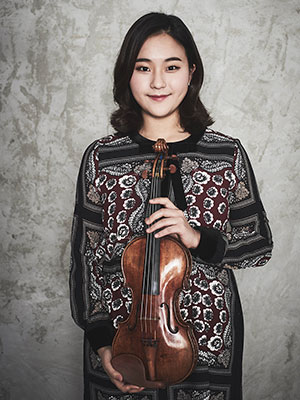 Ji-Young Lim has become a star since she won the first prize of Queen Elisabeth Competition 2015. In 2014, she won the bronze medal in the 2014 International Violin Competition of Indianapolis and received the ‘Best Performance of a Mozart Sonata’ prize. Even before these, she has already acknowledged her brilliant talents and fruitful musicality by many domestic and international competitions and festivals.

Ji-Young Lim started to play the violin when she was seven years old. She studied at Korea National Institute for the Gifted in Arts and has continued her study with Nam Yun Kim at the Korea National University of Art; now she continues further study at the Kronberg Academy in Germany. With this outstanding achievement, she received Kumho Musician Award from the Kumho Asiana Cultural Foundation and New Artists Prize from Daewon Cultural Foundation as well.

Ji-Young Lim performed at the concert hosted by the King of Belgium during his visit to Korea, and played as an artist representing Republic of Korea at the first anniversary of the Panmunjeom Declaration.

Since 2015, she has played the Stradivarius “Huggins, 1708”, which is a four-year special loan for the winner of the Queen Elisabeth Concours, and she has been chosen as the recipient for Stradivari “Sasserno” which was made in 1717 after Huggins. 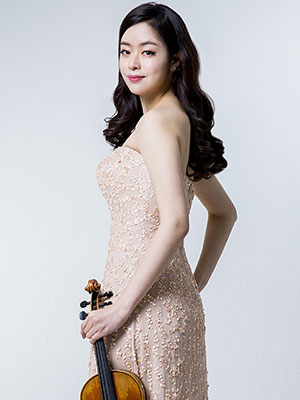 Kim recently began a new position as a professor at Seoul National University. 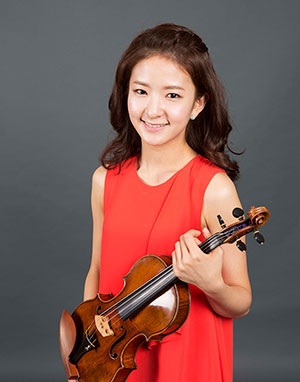 Applauded by The Strad for her “fiery virtuosity” and “consummate performances,” violinist YooJin Jang is a winner of the 2017 Concert Artists Guild Competition and First Prize winner of the 2016 Sendai International Music Competition in Japan. These two victories have resulted in a busy itinerary of international recital and concerto engagements and also the release of two new recordings for the rising young talent lauded by the Boston Musical Intelligencer as being “a performer without fear or technical limitation.”

Recent concerto performances include appearances with the Columbus Symphony playing the Brahms Violin Concerto and with the symphony orchestras of Chautauqua, Dubuque, DuPage, Roswell, and University of Chicago. In recital, highlights include YooJin’s Carnegie Hall debut and concerts at Jordan Hall and the Isabella Stewart Gardner Museum in Boston, the Dame Myra Hess Memorial Concert series in Chicago, and Rockefeller University in New York City. A passionate chamber musician, YooJin has performed with Caramoor’s Rising Stars and toured with Musicians from Ravinia’s Steans Music Institute and Musicians From Marlboro.

In 2017, YooJin released two albums: live performances of the Mendelssohn and Stravinsky Violin Concertos with the Sendai Philharmonic Orchestra and Junichi Hirokami, and a recital disc featuring music of Mendelssohn, Stravinsky, Grieg and Sibelius with pianist Kae Ozawa. Her first album, Korean Young Musicians, was released on the KBS (Korean Broadcast System) label, in cooperation with Aulos media & KBS Classic FM. She is also regularly heard on the radio, including a recent appearance on WQXR’s McGraw Hill Young Artists Showcase.

YooJin is also a co-founder of The Kallaci String Quartet, which made its international debut at the Kumho Art Hall in Seoul, Korea and the Seoul Spring Festival of Chamber Music. Recognized for her creative work in chamber music, she won the 2011 Borromeo String Quartet Guest Artist Award, and in 2009 she was awarded the Schloss Weikersheim Scholarship as part of the London String Quartet Competition. YooJin has also participated in the Marlboro and Ravinia Festivals, where she worked with artists such as Menahem Pressler, Dénes Várjon and Peter Wiley. 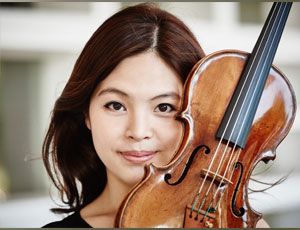 In 2018, her debut recording of the Korngold and Nielsen concertos has met much critical acclaim, earning five-star reviews and simultaneously named ‘Editor’s Choice’ on BBC Music Magazine as well as in Gramophone Magazine. Her following album titled Mythes featuring duo works by Szymanowski, Bartók, Stravinsky and Ravel was described on Gramophone Magazine as “another fine disc from Lee that consolidates her growing reputation and marks her out as an artist to watch in the future.”

Also a devoted chamber musician, Jiyoon regularly participates in music festivals across the world including the Verbier, Tanglewood, Kronberg and Hamburg chamber music festivals. Furthermore, she appears in numerous concerts as part of the Boulez Ensemble with artists such as Sir Antonio Pappano, Francois-Xavier Roth, Jörg Widmann and Daniel Barenboim.

Born in 1992 in Seoul, her career as a violinist commenced at the age of four. She studied at the Korean National University of Arts and with violinist Kolja Blacher at Hochschule für Musik “Hanns Eisler” in Berlin.

Jiyoon Lee plays on a beautiful C. F. Landolfi, kindly on a loan from Deutsche Stiftung Musikleben in Hamburg.