Romanian-born Mihaela Martin has achieved the reputation of being one of the most outstanding violin virtuosos of her generation. She began studies with her father at the age of five, and later went to study with Stefan Gheorghiu, who had been himself a pupil of George Enescu and David Oistrach.

Ms. Martin has won numerous international competitions, beginning with the Second Prize at the Tchaikovsky Competition in Moscow when she was 19, followed by top prizes in Montréal, Sion and Brussels. Her First Prize win at the First International Violin Competition of Indianapolis led to a steady international career. Her debut in Carnegie Hall, New York, was described by The New York Times as “one of the most exciting debut concerts of the year,” and The Washington Post wrote after her Recital at the Library of Congress: “’Mihaela Martin remains to ornament the music world for years…(She) played with the energy and virtuosity that are prerequisites for success. Her concentration is absolute, she is sure of herself and, above all, has imagination.”

Ms. Martin is a sought after soloist with a very large repertoire. Among the orchestras she has performed with are the BBC Symphony, the Royal Philharmonic, the Montréal Symphony, Mozarteum Salzburg, Gewandhaus Leipzig, Hollywood Bowl, with conductors such as Kurt Masur, Nikolaus Harnoncourt, Charles Dutoit and Neeme Järvi. Known for her intellectual and musical qualities, she is constantly invited to chamber music festivals all over the world, where she performs with musicians such as Martha Argerich, Yuri Bashmet, Elisabeth Leonskaja, Nobuko Imai, Leon Fleisher and Menahem Pressler, to name a few. She has performed for radio and television and has recorded several CDs.

Since 2003 she has been a founding member of the Michelangelo String Quartet together with Stephan Picard, Nobuko Imai and Frans Helmerson, with whom she tours extensively in Europe and Asia. One of the Quartet’s main projects is the recording of the whole cycle of Beethoven Quartets for the Pan Classics label in Switzerland.

She holds professorships at the Barenboim-Said Akademie, Musikhochschule Koeln, and at the Haute École de Musique in Geneva, and she gives master classes all over the world. Ms. Martin is regularly invited to be a member of the Jury for international competitions such as Queen Elisabeth (Brussels, Belgium), Indianapolis (USA), Enescu (Romania), and Tchaikovsky (Moscow). 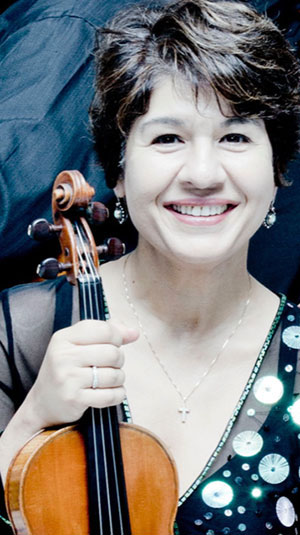